…and every time we thought we’d be rich, it all went wrong 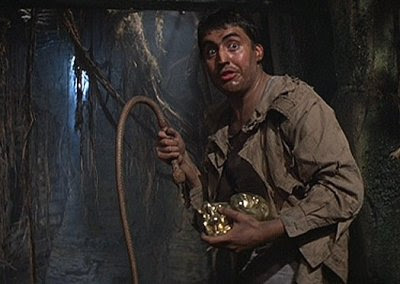 Just when Alfred Molina thought he was rich...
I arrange sessions of our ‘The Enemy Within’ campaign by Facebook. After a long gap between sessions, due to holidays and illness, I asked my players to remind themselves what had gone before. S, playing Stanley, the Elven Seer (and now Agitator for Elven-Human understanding), summed up the group’s previous adventures so; “There was some weird shit going down underground...and every time we thought we'd be rich, it all went wrong...”. Which suggests that we are playing WFRP the right way. 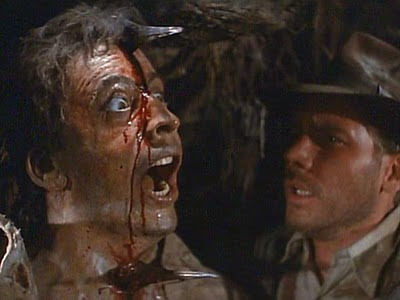 ...he realised he wouldn't be in the sequels, and would end up in a downbeat 'dramady' with Dawn French
We ended the last session with the party being escorted from the office of Johannes Teugen, after some frankly incoherent ranting about demons, murder and the Ordo Septinarius from Olaf, the Herdsman who bears an uncanny resemblance to the dead-by-the-roadside-target-of-an-assassin Kastor Lieberung. Quite frankly, I can’t tell whether Olaf’s oddness is the result of good roleplaying by C, or if C is just odd. Whatever, it is certainly entertaining, as is Olaf’s role as a sidekick to Stanley, throwing pamphlets on Elven-Human understanding – which the illiterate Olaf can’t read – in the faces of people who treat the Elf with the culturally appropriate level of suspicion and hostility.
And we’ve also had some PvP violence, at least within the confines of the wrestling ring. After Axel, a Protagonist, fighting under the name ‘Madhead’, defeated Schaffenfest carnival wrestler ‘Crusher’ Braugen two nights running, Olaf volunteered to step into the ring. Adopting the fighting name ‘Meatloaf’ (who am I to veto such silliness – this is a world in which a background NPC is called Von Saponathiem!), and with an unexpectedly good series of rolls, Olaf knocked Axel out, nearly ruining the promoter, who had offered long odds on the farmboy. Unfortunately for them, they’re now relatively famous faces in Bogenhafen (and beyond), which has got them out of a scrape or two, but might well prove a handicap if they need to pass unnoticed anytime soon, anywhere nearby.
A note of playing a game with session-based experience systems: I am a little worried that the characters are gaining experience at too fast a rate. As adults, we don’t play for hours upon end – a typical session being a 3 hour game from 8pm (after baby R is definitely in bed) while 11pm (so we can all shuffle off to bed at a sensible hour) so the per-session suggested EP rewards are probably accumulating at a quicker pace in terms of game time than the designers expected. A long time ago in a far away place (no, really, the 1980s and the Dominican Republic) we would play D&D for twice that length of time (easily) – there was only homework and Nintendo to get in the way. To compound that, as adults, we seem to get through less ‘action’ or ‘plot’ than we did as gung-ho kids – far more time is devoted to fleshing out the little encounters, the incidences of adventuring, than I remember ever doing as a teen (for example, when I ran my mother and A through the Oldenhaller Contract last year they spent a fair portion of the time working as labourers and exploring the city than biting on any adventure leads I presented to them. And they enjoyed doing that). I think that it might be sensible to go for EP rewards at the low end of the recommended scale for future sessions. Gotta keep that grim vibe going.
Posted by Andy Bartlett at Friday, September 23, 2011