In January I became a father for the second time, which is kinda holding up gaming. She weighed 3lb 12oz, which, I'm fairly sure, is lighter than my old 'white metal' Great Unclean One. Since then we've rolled up a few characters for the RQII/Legend sandbox, and then played Heroquest when the babe in arms inhibits concentration on anything more complex. As for painting, I've only managed a handful of models. As I doubt that I will paint the miniatures that I got at Christmas before Christmas rolls round, I might well go through 2012 without buying a new miniature. However, here are a few Dwarf Trollslayers that I finished. The one on the right with the Goblin in a cage was mostly finished before arrival of child 2.0, and as such is painted in a slightly different style. New style = more Devlan Mud (extinct). They need a couple of tufts of static grass, but when I paint the black on the edges of the base, that is 'painting over'. 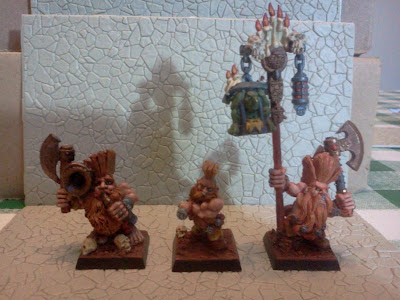 The crazy paving background is from a model train shop. I'm planning on using it to make bases for the Heroquest miniatures.