In AFF2e PCs and Monsters have a SKILL score, which for PCs ranges between 4 and 12. PCs also have Special Skills, for example Sword, which range from 1-6, which are added to the SKILL score in appropriate situations. This can, eventually, produce PCs with ‘effective’ SKILL scores way beyond 12 - though a starting 'warrior' PC will likely have an effective SKILL of 9 (SKILL 7 + 2 points of Special Skill) when using his or her favoured weapons. The monsters in Out of the Pit were given SKILL scores to provide a challenge to a single gamebook PC with an SKILL score of 7-12. This means that most starting PCs geared towards fighting are at the same effective SKILL level or better than most humanoid monsters. Even a Lizard King is only SKILL 9.

Combat in AFF is resolved by generating 'Attack Strengths' by rolling 2d6 and adding effective SKILL, with the character with the higher Attack Strength doing damage to the STAMINA of the loser. Differences in effective SKILL can be understood as modifiers to the 2d6 roll; a PC with an effective SKILL of 14 has, essentially, a +7 modifier to a 2d6 roll off vs a SKILL 7 Great Orc. Modifiers have a quite dramatic effect on the distribution of results on a 2d6 bell curve, so just a few points difference in effective SKILL can settle a fight. The effect of all this is that PCs with just a few sessions' worth of Experience Points (EPs) spent on SKILL and a weapon Special Skill are BAMFs.

Now, there is nothing wrong with PCs being BAMFs. Don’t misread what I wrote in the PatheticAesthetic – I was explicit that in Fighting Fantasy gamebooks YOU are often one of the most dangerous things on Titan – there is a 1 in 6 chance YOU would have SKILL 12, after all. But YOU are always a poor decision, or a Test Your Luck, away from your doom. In an adventuring party, containing several starting characters with the combat capabilities of a Lizard King, and with characters growing progressively more powerful (neither of which is part of the original gamebooks), the PCs are at risk of outstripping the power level of the world. What I am trying to do is find a way to accommodate the BAMF that AFF2e produces while retaining the risk, danger and peril that is found in every corner of Titan over the course of a long-term campaign. And I would rather fiddle around the edges of the AFF2e system than toss out the monster stats from the brilliant Out of the Pit. 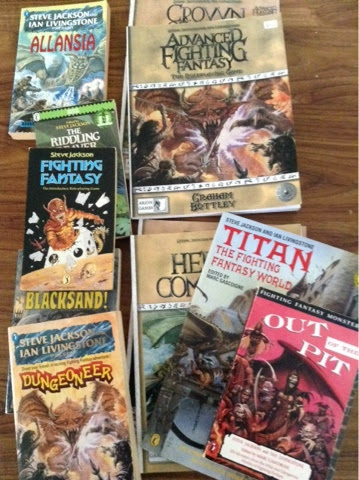 So, I’m not proposing messing with the AFF2e experience point and advancement system. Players, if they choose, can still end up with a PC with SKILL 12 and pour all their remaining EP into getting Special Skill Sword up to 6. The advice in the rulebook is that between 30-40 EP should be given to each PC for the average 3-4 hours of play. Now, while it might take 1000 EP (25+ sessions of play) to go from SKILL 7 to SKILL 12, going from Special Skill 2 to 6 is a matter of just 180 EP (5 sessions of play). So, while the effective SKILL 18 munchkin is the best part of a year of weekly play away, it is likely that combat orientated PCs will have effective SKILLs of greater than 12 within a modest number of sessions.

I am proposing that, no matter what effective SKILL score might be arrived at by adding SKILL, Special Skills and circumstantial modifiers, for the purpose of SKILL tests or generating Attack Strengths the maximum effective SKILL is capped at 12. So in a situation with no modifiers, a PC with SKILL 11 and 1 point of Special Skill Sword has an identical effective SKILL as the munchkin Sword Master with effective SKILL 18 described above. If they are fighting each other, they both roll 2d6 and add 12. Essentially, each round is a 2d6 roll off.

This means that when the Sword Master comes up against a SKILL 7 Orc, he has, in effect, +5 bonus to his Attack Strength, rather than the +11 bonus ‘uncapped’ effective SKILL would produce. This keeps combat (and Skill Tests) dangerous.

But why become a master in a Special Skill? Why spend all those EP to become a 'Skill Master'?

So, when fighting in the dungeons beneath Lord Azzur’s palace, the Sword Master can extinguish the lantern and fight in absolute darkness. This will mean, with the -6 modifier for fighting in darkness, he will still have an effective SKILL of 12. His opponent, Azzur's captain of the guard - SKILL 12 - is reduced to an effective SKILL of 6. And the simplest way to understand this at the table is to think of it as a +6 bonus to his 2d6 roll of the Sword Master. And, having defeated the captain, when fighting up the narrow spiral stairs, he can easily shrug off the -3 modifier to his effective SKILL. In other words, those with an effective SKILL of over 12 are able to cope with conditions that would defeat the ordinary man or woman (or Dwarf, Elf, or Rhinoman).

Skill Masters can also make easier use of the combat options that apply a negative modifier to their effective SKILL. So those with an effective SKILL of over 12 can more easily go on an 'All Out Attack' (-2 to effective SKILL to add +1 to the STAMINA damage caused) or a similarly 'munchkinned' archer could fire two arrows each round using the 'Rapid Shot' option, even in poor conditions, without compromising his or her effective SKILL.

***This is an important change. Modifiers that are, as per the rulebook, assigned to the combat total/Attack Strength are instead assigned to 'effective SKILL', which is calculated before the 2d6 rolls. And as described above, differences in effective SKILL can be simplified to a simple modifier to the 2d6 roll for the character with the advantage. Now, in this system it matters whether a condition abstracted into a modifier is represented by a bonus or a 'malus' (negative modifiers). Bonuses are of little use to those with already high effective SKILL if it is capped at 12, but on the other hand they are able to absorb the effects of any malus. I wondered if, with this in mind, all modifiers should be negative (only fighting down steps, outnumbering, and a rear attack give bonuses) but I figured that I would keep positive modifiers for two reasons. One, so that I can use the table in the rulebook, and so can my players. But two, so that being outnumbered would still be a frightening experience.

FINAL NOTE: Only PCs have their effective SKILL capped at 12. Monsters in Out of the Pit with a SKILL of greater than 12 are not capped in this way. These kind of monsters are rare indeed, being Demons, Elementals, Dragons and the like (even Giants are 'just' SKILL 10). Human(oid) PCs are not meant to beat these creatures in a straight stand-up fight, and indeed in the source material YOU are rarely expected to do so. The key is always to find the MacGuffin, the special weakness, or come up with a cunning plan to circumvent the sheer power of these monsters.