On the Great Copper Coin Debate of 2012 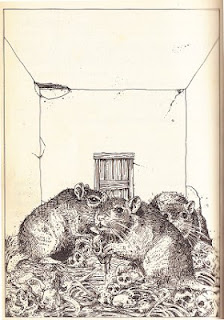 Well, so what? D&D is a GAME of ABSTRACTIONS. HP, AC, Characteristics, Saving Throws, Levels...

Do you want more detail? If it is the round numbers that bother you, make something up or use the random number generators that came in that red box you bought thirty years ago. If it is that there is a pile of coins in the lair of Giant Rats that bother you, remember that 2,000CP is 20GP* worth of treasure that weighs 2,000cns / 200lbs (at AD&D convention of 10 coins to 1lb) / 40lbs (at AD&D2e convention of 50 coins to 1lb). In other words, a big, bulky treasure that isn't worth very much. A nice piece of furniture, perhaps.

I play treasure all three ways - "here's a pile of 2,000CP" / here's a pile of 1,876 Emirati Coppers / "as you catch your breath [after fighting the Giant Rats], you notice that the sideboard on the far wall would complement the furniture of your dining room."

D&D is a game in which advancement is driven by loot. Even if Giant Rats having piles of coins (or any treasure) wouldn't make sense in the real world (if there were such things as Giant Rats), it MUST make sense in a D&D game world. Okay, maybe Giant Rats could be Treasure Type: NIL, but the principle that monsters (might) have treasure, and that this treasure is relatively easily convertible to GP/XP, is an essential part of D&D.