I am terrible at keeping track of my appointments. Thank God for e-mail and the internet; no matter what I need to do, I regularly have to check / double-check the place, time and details of whatever meeting I am scheduled to attend. I rarely miss an appointment; I just exist in a state of perpetual uncertainty.

That said, THE SILVER CRUSADER did miss his Appointment with F.E.A.R. I knew when, and roughly where I was meant to meet Vladimir Utoshski, the Titanium Cyborg. But roughly where was not good enough… 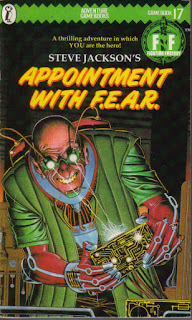 SKILL 18? This geek is the most dangerous man on the planet!

I rolled up a super super-hero for this book, and with SKILL 12 I figured that as THE SILVER CRUSADER was the Goddam Batman I would not need ‘real’ superpowers, so I selected the ‘whizz with gadgets’ (Enhanced Technological Skill) power. Appointment with F.E.A.R. is an interesting Fighting Fantasy book as it has multiple start points; with four different superpower packages and a range of different starting clues, there is definitely the feeling that this is no ‘one true path’ gamebook.

It is not all superpowering about Titan City, though. Pity the Goddam Batman - no matter your superpowers, YOU have a front identity as an office drone working for J. Jonah Jameson. No, Perry White. Actually, Jonah Whyte. The book is full of little references to comic books and popular culture, no doubt many of which I missed reading it a quarter century after publication. I did not miss the worst; pop star, Michael Blaxson. Groan…

I have never been a big fan of the non-fantasy Fighting Fantasy gamebooks, and I had remembered this book as being one of the worst (before playing I was prepared to call this post ‘Dis-Appointment with F.E.A.R.), but I enjoyed this read. The adventure is a mix of following the main mission – foiling a world domination plot by the super-terrorist group F.E.A.R. and responding to the everyday supervillainy of Titan City. I was surprised at just how much a sense of agency I had when reading this book – always being presented with several ‘adventuresome’ options, and always feeling that if I chose to defeat the monster in the park my adventure would turn out in a different way than if I had chosen to arrest a group of bank robbers. The actual villains are often quite gonzo – more Adam West than Christian Bale Batman – but the book is all the better for it; a gritty Titan City filled with enough supervillainy to avoid feeling like a railroad would be ridiculous, for all it might be ‘dark and gritty’, while a lighter, more gonzo setting can be populated with the likes of THE SCARLET PRANKSTER, STREAK GORDON, and THE CREATURE OF CARNAGE and yet maintain its (zany) coherence. Light and gonzo does not mean that YOUR adventure will not end pathetically.

And my Goddam Batman had a particularly pathetic end; destroyed by space laser while riding in a taxi. Okay, he had tracked down the time of the meeting of F.E.A.R., he knew which street the villains were meeting on. Hell, he had even discovered that the bad guys were having their pow-wow in a Chinese laundry. But he did not know the street number – and so did not know which page to turn to – and rather than trying *a* Chinese laundry, my Goddam Batman decided to take a taxi home. While he was engaging in idle chit chat with the driver, F.E.A.R. had presumably agreed their fiendish plan AND got their delegates out of Titan City, because before he got home F.E.A.R. took over the airwaves to announce their demands for world domination, before demonstrating the power of their space weapon by blowing up the very city in which they had been meeting just minutes earlier!

The Goddam Batman. Vaporised in a yellow cab.