So, Ray Harryhausen has died, a man who helped shaped the visual imagination of the fantastic for several generations. Not just what the fantastic should look like, but also how it should move - if I ask you to picture an animated skeleton, chances are the image in your mind will be moving as if it were animated by Harryhausen.

Now, countless better obituaries (see the BBC or the Guardian (which carried a couple of other pieces too [one, two] and a 'life in pictures' feature) than any that I would write - 'he lived a long life, his creations were extremely influential, and he was respected by most and revered by fans', - have been published - and plenty of bloggers (Warlord Paul and Telecanter, for example) have posted their own tributes to the influence that Ray Harryhausen  has had over their gaming imagination.

So, having painted up some Harryhausen-esque skeletons, I decided let a bit more of Harryhausen's influence work its way into my gaming. I dug through my big box of bendy plastic fun, aka my Reaper Bones Vampire package, looking to find something else with echoes of the work of the great man. And I found this: 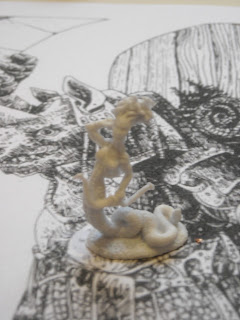 A GORGON! Armed with a bow, too. The details don't show up too well when the white plastic is bare, so... 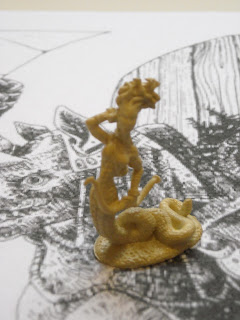 A quick undercoat (despite what Reaper say, the Bones still benefit from some kind of priming) using Privateer Press' Menoth White Base, and then... 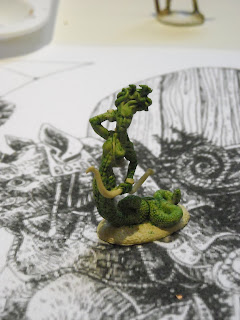 ... a liberal application of Vellejo Black Green Game Ink, and we can actually see what we're working with. 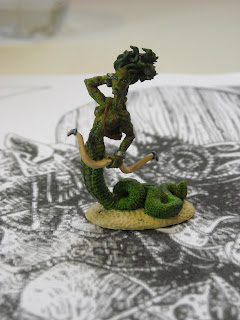 Umpteen different shades of green later (plus some Elf Flesh and Ogryn Flesh wash to give the upper body and face a bit of 'life') and we have a near finished miniature. 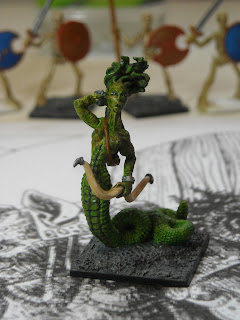 And here she is, based up and with the backing of a boy band's worth of Harryhausen-esque skeletons.

[Incidentally, for those of us Old School/Oldhammer bloggers with younger children (and a subscription to Lovefilm), the 'Claymation Story Book Classics' is actually a collection of very early Ray Harryhausen work - my daughter loves them, though I find them more than a bit sinister. But then I know what else moves in that manner, don't I?]