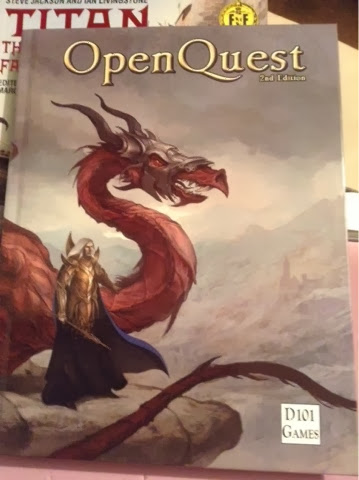 After The Crown of Kings concludes (probably tonight, with our face-to-face group convening over Google+ - except for my wife, who I hope will join me at the table rather than play from the next room on her laptop), I'm increasingly drawn to the idea that our next game involve plenty of percentile dice. Thing is, as well as several out of print d100 fantasy games, I own OpenQuest, RuneQuest 6, and Magic World to draw from. I've also got the in-print Legend, but if I'm going to play that, why not just play RQ6? That's not to say that YOU shouldn't play Legend at is $24 cheaper (or one 25th the price...), but given that I own RQ6 (plus lots of MRQII books), I may as well play the 'refined' version.

I know that the *right* answer is to take the best bits from each, and build my own game, but I do like being able to run a game from a single book - or at least, a small number of directly comparable books.

I like OQ2e for its simple but comprehensive skill list and the way that the game runs smoothly at the table, with next to no fiddling about. I like MW for its character creation, which uses 'culture' and 'profession', providing a bit more flavour than OQ2e, but avoids the extended chargen process of RQ6 by allocating the skill points so neatly - in good sized blocks - that generating a PC is almost a quick as it is in OQ2e. Actually, it does what I was trying to do with my 'Hammerstein!' templates, but far, far more neatly. I like RQ6 for its elegant combat system (to what degree would using some variant of that break the simplicity of OQ?). Can all these be shoved together? Is it worth bothering, or should I just run a game straight from the book?

And where to play, one which worlds....