A beautiful day, we had lunch on the way // And all for under a pound, you know

Actually, the PCs had lunch in the kitchens of the Fortress. Despite the quite frightful possibilities, Ho Lee’s adventures in evil cuisine passed off with disappointingly little consequence. The luck of the dice sometimes does fall the way of the PCs. And for under a pound? Now that would be a bargain, given the price gouging rip off merchants that pass themselves off as traders and innkeepers in the Shamutanti Hills.

How on Titan did the PCs get into Mampang? Well, the last we heard from the party they were about to try the 'Chewbacca Gambit'. In fact, I’m pretty sure that D, playing Ho Lee, did utter the line, ‘We’re fine, how are you?’ and, ‘Boring conversation anyway,’ during the three sessions it took the party to reach their fate deep in the Fortress. That said, my memory is sketchy these days – despite my ‘it were better in my day’ shtick, that’s probably the multiple concussions more than it is age.

The first session involved negotiating the three courtyards of the Fortress of Mampang. The first courtyard is mostly empty, with the first set of magical Throben doors requiring merely requiring a key. Easy peasy; the party searched the rooms around the gate, made mincemeat of some Dark Elves for no reward, but found the key nonetheless.

The second courtyard is a much more interesting place, filled with the kind of colourful encounters that are the essence of the early Fighting Fantasy books. Gambling guards, a pathetic beggar, a mysterious column, aggressive Red Eyes and treacherous Sightmasters. The PCs had been told by the guards on the main gate that they needed to go straight to Valignya, First Assistant to the Lord Treasurer of Mampang, to pay the tax on their ‘booty’. I’m not sure that Cramer would appreciate being described so…

Throughout this game the party never really acquired the ‘world sense’ required to adventure in Titan. Set a goal – whether it was cross Kakabad or find NPCX – and they would pursue it single-mindedly. That's probably a very good strategy when given a mission in the real world. Unfortunately for them, Titan is a *very* strange place. Dismissing a wretched beggar or a strange shop as unimportant with regard to the pursuit of goal might work in the logic of the real world, but on Titan (not least because of the legacy of the gamebook structure), YOU can never know what might be found pursuing those little diversions.

Death, quite possibly. As a legacy of the gamebook structure it is often the case that, on Titan, players must make decisions without sufficient information, and the decisions are therefore meaningless. Do YOU open the door? Do YOU go left or do YOU go right? Do YOU approach the beggar? In gamebooks it is often the case that acquiring the necessary information necessary is achieved by way of (repeated) failure. And I don’t care what you all say – in a game failure can be fun.

YOUR Adventure Ends Here. Roll up a new YOU. See my adventures in failure here.

That works... for a gamebook; as much as some of the ways to fail in a FF book are 'unfair', I am pretty confident that I would feel cheated if gamebooks were routinely 'won' on the first play. But then,when playing a gamebook there is just YOU, so playing again is simply a matter of grabbing a new sheet of paper, rolling four d6, and returning to section 1. But in a multiplayer tabletop RPG (for which you have assembled your friends in the face of the demands of real life) there can be only one attempt to recover the Crown of Kings, else the success or failure of the quest, in having no consequence, has no meaning. If there is one thing that the Arion Games version of Crown of Kings needs, it is a GM willing and able to saturate the adventure with the kind of information (clues, hints, foreshadowing, and the obligatory confessions extracted by torture) necessary for the players to make informed, meaningful decisions and avoid (though good play) the multitude of possible TPKs. I got better at this as we played, though I did swallow my principles and ‘rescue’ the party a few times, something that I would not have done in a living sandbox. But then my living sandbox would never involve the kind of deathraps with which the Archmage had peppered his Fortress. 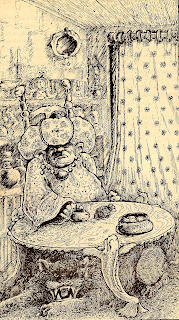 Scan of picture, by John Blanche, borrowed from Fighting Fantasy Project, which, coincidentally has just finished its own playthrough of the the Sorcery! gamebook series.


First though - Valignya and the tax. Curiously, his room is found off the second courtyard beyond the chambers of a monster trainer. I redrew the map somewhat, to make it possible for the residents of Mampang to pay their dues without having to get past a murderous MUCALYTIC. Despite the utterly unhelpful monster trainer, the party made it to Valignya's room unmolested. Valignya was a fat man living in superficial opulence, with ornate fabrics and elaborate trinkets on every surface; the accumulation of tax paid in kind. He demanded a cut of the value of the 'prisoner', which the party paid, but the taxman then demanded the prisoner herself; he would either add Cramer to his retinue of slaves, or he could use her to enhance his credit with those who reside deeper in the Fortress. The party resisted, naturally enough, demanding the honour of turning her over to the master torturer in person. Valignya surreptitiously tried to poison the PCs, but failed (never underestimate high Luck scores). Shifting nervously, he decided to take the profit where he could find it, and demanded a 'door tax' if he was to give them the information they needed to pass the second set of Throben Doors and find Naggamanteh.

A GM should always change the names found in a published adventure if they are unpronounceable. Alara-whatnow? Few things are worse for immersion in a fantasy world than a GM who needs ten attempts to pronounce a word. Ahem...

But at least this was a magic word, not the mangling of an ordinary name that looked good when written down. And with that magic word, the second set of Throben Doors opened harmlessly and the party found themselves in the third (and final) courtyard of Mampang. From this courtyard the party enjoyed a diversion in the kitchens of the Fortress, before heading straight for the torture chamber. Opting not to open doors unnecessarily, they managed to avoid meeting the good BIRDMEN, the Samaritans of Schinn, and a crowd of bad Birdmen, loyal to the Archmage. They managed to avoid an amusing romp in a room full of mutants. Instead, confident that the goal that they had set themselves was, without question, the necessary next step in the adventure, they made straight for the torture chamber of Naggamenteh. 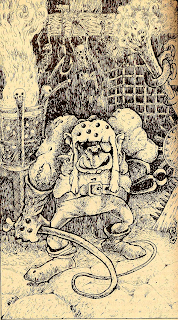 He looks bashful. So they bashed him in. Scanned image again borrowed from Fighting Fantasy Project, by John Blanche.

An OGRE - and an unusually ugly one, even by the standards of his species - Naggamenteh is not used to bargaining when he doesn't hold the whip hand. Literally. This encounter descended into a fight pretty quickly, but facing three hardened adventurers, the Ogre didn't stand a chance. Begging for his life, the party did as all good adventurers would do - they improvised, employing the material at hand. The material at hand was some of the most sophisticated torture equipment on the surface of Titan. They soon had one dead, mutilated Ogre and a warning that the magic that guards the third set of Throben Doors is not what it seems.