AFF2e: The Virtues of Asymmetry


I haven't written about Advanced Fighting Fantasy, or even the world of Titan, for quite some time.

A long time ago I had planned to write a post about embracing the 'asymmetry' of Advanced Fighting Fantasy 2e. About when I was writing posts rationalising the meaning of SKILL in AFF, I spotted that Jonathan Becker (JB of B/X Blackrazor) has written this:

"a monster's profile is just plain different from a player characters (this is not the case with 3E/Pathfinder where monsters have ability scores, feats, skills,etc.). If monsters exist as challenges to be overcome (however one chooses todo that) then why the hell do they need to be all statted up? A ridiculous excess, in my opinion."

And then I did nothing with it. But it gets to the workable, easy solution to the seeming problem that in AFF2e SKILL is inextricably linked with combat, but for PCs non-combat tasks are resolved by a system involving SKILL and Special Skill ratings. This gets people trapped in the question of how they should represent NPCs with significant non-combat expertise. And the answer: remember, these are not PCs, and do not need a PC stat line.

For a PC, SKILL is something best conceptualized as equivalent to Level, with 7-8 being Adventurer, 9-10 being Hero, 11-12 being Legend, or something along those lines. So as PCs increase in SKILL, they increase in everything in which they are 'skilled'. For an NPC, however, SKILL is just a measure of that NPC's combat challenge. They do not have 'Special Skills' - NPCs simply do not need to exist in that level of granularity.

How do you 'build' the NPC master merchant who couldn't fight his way out of a wet paper bag? Do you give him SKILL 4 and Bargain 6? That still 'only' gives him an effective SKILL of 10, hardly enough to be the best negotiator in Allansia. Give him SKILL 6 and Bargain 6 and introduce special modifiers to represent his lack of combat ability? Why the complication? What would SKILL mean then anyway? 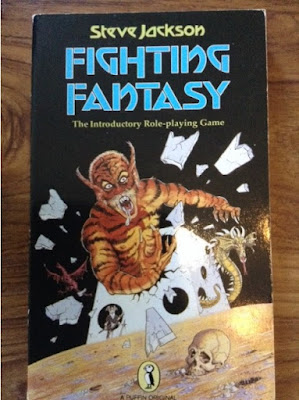 AFF is the inheritor of this little gem, not GURPS after all!

No, AFF is meant to be a simple game. The master merchant should have SKILL 4 STAMINA 5, which adequately represents him as a combatant, and on the same index card you scrawl 'PCs attempting to bargain with Marco Columbo suffer a -4 penalty to their effective SKILL'. Instead of opposed tests - which require NPCs to be statted out as if they were PCs - non-combat 'contests' are then conducted as unopposed tests based only on the PC's SKILL and Special Skills, plus or minus modifiers, with the capability of the NPC to frustrate the aims of the PC being expressed as a simple modifier. The NPCs are treated just like any other feature of the world of Titan that might affect the PC's chances of achieving their goals.