Rather than simply putting up pictures of whatever I have managed to paint, I thought it a good idea to write them into my campaign as NPCs or encounters, even if the miniatures themselves won’t necessarily be used in play. I've statted them out for Hammerstein!, which is simply OpenQuest/Renaissance/Legend with a few tweaks.

Lenk the Sour is a Captain in the forces of the 2nd Centurion of the Half Clock*. 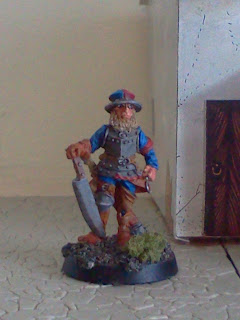 
The 2nd Centurion is a brutal overlord. Refugees from his underpopulated Shadow can be found in Wilderhaven, living in crowded Docktown tenements. The 2nd Centurion will burn villages in reprisal for some slight, or simply to clear land for his great passions, the noble pursuits of hunting and tournament. The 2nd Shadow abounds with ruined villages and overgrown copses, providing a home for Faerie and worse.

The 2nd Centurion has little need to maintain a population of agricultural peasants, and has even less inclination to meet his feudal obligations to them. He controls the Fort-agin-the-Moors. The Fort is a staging post for Adventurers into the Craggen Moors, and as such is home to trade in exotic pre-Cataclysm artefacts and relics, with ‘liberated’ abhuman treasure hordes inflating the prices of everything from ordinary provisions to weapons and armour. There is also a woollen mill and monthly textile market, as the luxuriously fine wool from the Ogre shepherds enters civilised lands through the Fort.

Lenk is the 2nd Centurion’s prime thug. The 2nd Centurion despises Lenk for his crude manners and low birth, and Lenk responds with ever greater servility and renewed attempts at ingratiation. Lenk, therefore, has erased any conscience that he may once have had. He feels no doubt or remorse when he dispossess peasants, mutilates poachers, or cuts off the thumbs of militant wool workers. There is nothing Lenk will not do to his own people, if he thinks it will win favour from his ‘betters’.

Lenk is a tall, powerful man in his 40s. His small, alert eyes are set in angular features. Even as his face is mean, it takes on a pathetic cast when interacting with those of noble birth, or who otherwise hold power; from weasel-cruel to grovelling-mouse.

Among Lenk’s weapons is a COWARD’S FALCHION. Lenk knows that it is a powerful magical weapon, but he does not know its true nature. Forged by a sorcerer for his orc general, the brutal looking weapon has a vestigial intelligence, and seeks to be in the possession of the strongest warrior it can. When fighting an opponent with an inferior combat skill (use the opponent’s highest skill, even if it is not the one being used), the Coward’s Falchion grants a two step increase in the wielder’s Damage Modifier. This means that Lenk often has a +1d6 Damage Modifier. However, when the Coward’s Falchion is used to attack someone with a superior combat skill it betrays its wielder inflicting a -20% penalty to both attacks and parries.

[The Coward’s Falchion impresses its own primal personality onto the wielder. You might want to resolve this by using ‘experience’ checks against Pendragon-like personality traits. The owner of the Coward’s Falchion gains a check against Cruel, Arbitrary, and Cowardly at the end of each game year. This is IN ADDITION to any checks against these traits that may have been gained for the cruel, arbitrary, and cowardly acts that the character might have performed using the weapon. If the character hasn’t carried or handled the Coward’s Falchion for any significant period of time during that year – for example, if it has been locked in an armoury, no checks are necessary. However, even if the character primarily fights with another weapon, or does little fighting at all, so long as he or she carries the Coward’s Falchion it will warp their personality. A simpler option is to impose Persistence tests that increase in difficulty over the years, each time the wielder is presented with an opportunity to be cruel, and especially to cut down the weak. If the test is failed, the personality of the Coward's Falchion will assert itself.]

*Wilderhaven is built on the site of the Classical city of Kallipolis. During the Cataclysm, Kallipolis burned, its buildings fell, and much sank into the bubbling tar of the Belch. During the Classical Era, the countryside was controlled by six forts arranged in an even semi-circle – a half-clock – to the east. Each of these controlled a ‘Shadow’ of Kallipolis, with the city itself conceived of as the hand of a sundial. After the Cataclysm, the commanders of these six forts used what was left of the legions under their command to carve out hereditary baronies. They have retained some of the Kallipolian stylings – Classical history is the source of their legitimacy – so tin-pot barons call themselves centurions and their brute squads are their legions. They currently owe their feudal loyalty to the Pirate King, their power inextricably tied to the economy of Wilderhaven.