The Reaper Bones arrived last week. A box full of bendy plastic miniatures. I decided to set to work straight away - at my own slow pace - and painted up some of the undead. Why undead? Well, they're easy to paint, using only a pretty limited pallette and there is no requirement that you attempt to bring the faces 'to life'! 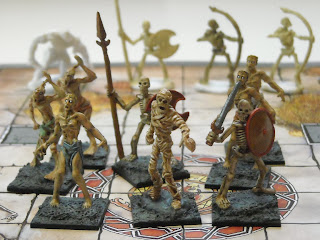 I think they look pretty decent - the SKELETONS have a very 'Harryhausen' look about them - and it is certainly difficult to tell that they are made of bendy white plastic when painted up. Not so much though when you hold them, or waggle the end of the skeleton's spear - which waggles free and easy. Some of the models arrived quite bent, but this can be fixed with a dunk into very hot water, straightening the bent piece out by hand and dunking the straightened bit into cold water. I didn't even try to remove the mould lines, for three reasons. 1) Apparently, the material from which Reaper Bones doesn't file easily - and given how flexible it is, I'm happy to take the word of others there. 2) The point of miniatures this cheap is that they are gaming pieces. Nice looking gaming pieces, worth spending some time painting, but not worth investing in hours of effort to ensure that a ZOMBIE has a shoulder smooth as a baby's bum. And 3)  I've got bloody hundreds of these things to paint.

So what's in the big box? 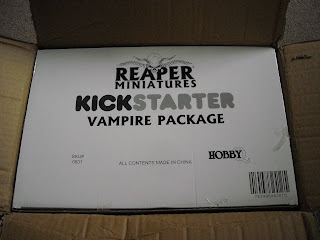 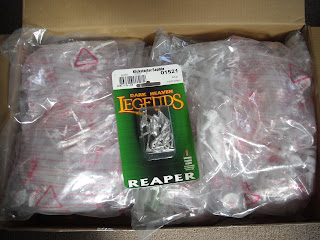 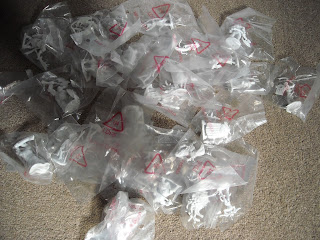 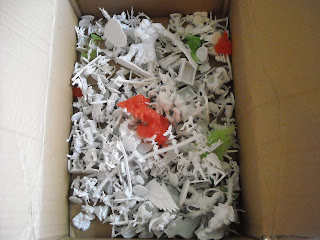 A whole mess of miniatures. I'm starting painting the smallest stuff - the level 1 stuff, so to speak. The undead, then some GOBLINS (the classic kind, not the Pathfinder grinning munchkins), then some 'vermin' (swarms of RATS, SPIDERS and so on), and a small pack of KOBOLDS. But as you can see there are some more impressive monsters in there too - including a GIANT, though I'm not too impressed by his female counterpart, who appears to have that back problem that fantasy females tend to suffer from. You know, the lower back problem that leaves them sticking their arse out all the time! There are also townsfolk, some sci-fi miniatures (including a squad of what will work nicely as a Planetary Defence Force / Adeptus Arbites for 40K-ish games), a few bits and bobs of dungeon 'furniture', and endless varieties of Fighters, Elves, Magic Users etc - some overblown, some more modest in their 'awesomeness'. Not a bad haul.

So far, I'm pleased. If your tastes run to Forgeworld resin, then there isn't much for you in Reaper Bones - though I will say that the material handles bigger monsters better than it does things like a skeleton's spear. However, what I am getting from Bones is the urge to churn out painted monsters for my players to face (and I have some damn fool idea of painting up enough miniatures to handle the monster distributions on my random encounter tables), and psychologically, the cheapness and the 'obviously-not-collectors-items-or-for-winning-Golden-Demon' nature of these miniatures has me painting quickly.

Would I pick up more? Almost certainly, though it won't stop me buying lead, old and new.