Who Needs a Dragon?

No animal is half so vile as Crockywock the Crocodile...

A long time ago I read a news story which reported that a drunk Australian had tried to ride a 5m long crocodile weighing 800kg. He survived, if he was a little chewed. That prompted me to set about searching the internet for pictures to put that croc into context. 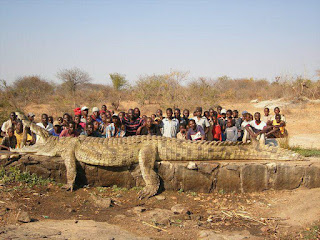 Imagine trying to take one of these on with a sword and shield while knee deep in swamp water?

A D&D Fighter, remember, will have on average slightly more HP than a monster of equivalent HD to his level - he'll likely have a bonus from Constitution, some kind of minimum HP house rule, or outright fudged dice!

A Magic World warrior will have perhaps 15HP... full stop.

Big beasts are more frightening in d100 games. But then the play-style in D&D ought be at least a little different from BRP-derived games - certainly where combat is concerned. I was going to write a long post comparing chances to hit, calculating average damage by round, and then I realised that I would end up doing something as boring as the old Monstermark articles in White Dwarf!

So I will short cut all that. I like games in which big beasts are dangerous. But big beasts in D&D *are* dangerous - though I often have to remind myself of the fundamentally abstract nature of D&D combat (and I always need to hold in check my desire for realism and granularity in D&D combat) which means that comparisons with blow-by-blow systems are not always straightforward. But for all the Crockywoks in your game, FANTASY gaming needs DRAGONS. While we shouldn't forget the terrors of 'ordinary' animals (though in a world created, deliberately, by supernatural beings, even ordinary creatures are the product of a god's violent imagination), let's have some bright, primary-coloured fantasy to mix with our realistic shades of  green and brown.