I really love Caverns of the Snow Witch. The art, that is. Gary Ward and Edward Crosby produced some stunning mock-woodcut illustrations that give the book a really distinctive atmosphere. If they had a wider portfolio of gaming art they might well have got up there with Chalk, Nicholson, and Blanche in my personal pantheon. 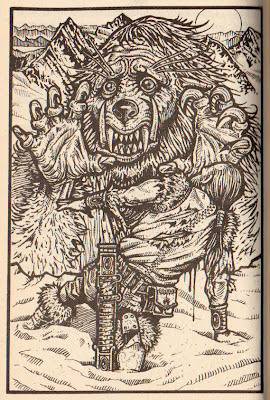 Borrowed from Turn to 400, who does this much better than I
Pity then, that I didn’t get to see many of the illustrations in their proper context, my adventurer dying after two – yes TWO! – paragraphs. So, there’s this ice bridge over a crevasse, right? It looks dangerous, yeah? Precarious, even. So, being a cautious adventurer, I decide to skirt the lip of this crevasse, only to run into a MAMMOTH. An angry, SKILL 10 MAMMOTH, with no option to retreat. With a SKILL 7 adventurer (I told you I was playing these straight, no cheating) there was very little chance of surviving this encounter. So, my adventure ended there.

Naturally, I wasn’t satisfied with a two paragraph game, so I rolled again, this time getting a SKILL 9 LUCK 12 adventurer. Who cares about STAMINA? I’ve got 40 STAMINA points of provisions in my bag! Now, this guy, the luckiest man alive, I decided would be able to cross the ice bridge. Sure, of course he could. And, with SKILL 9 and a good dose of TEST YOUR LUCK, he killed the SKILL 11 YETI (it would have been SKILL 10 if my adventurer hadn’t fumbled his spear). The adventurer then lucked his way through, deep into the Snow Witch’s lair, only to run into a SKILL 11 CRYSTAL WARRIOR. My adventurer had a warhammer, so he was able to fight the diamond geezer, but the two point difference in SKILL was too much to overcome – easily eating up my adventurer’s extra 10 points of STAMINA and his 13 points of LUCK (Potion of Luck, never leave home without one). The annoying thing is that just a couple of paragraphs earlier my adventurer had won the favour of a GENIE. Had he not been carrying the warhammer he could have called on the GENIE for aid. As it was, my adventurer stood there, ineffectively swinging his warhammer as the CRYSTAL WARRIOR cut him to ribbons. The life of the second incarnation of my adventurer ended here.

Did Ian Livingstone expect the kids reading these books to cheat? The proliferation of SKILL 10+ combats in this book, most of which are either literally unavoidable on the part of the reader (the YETI) or unavoidable by the adventurer exploring on the basis of the information presented in preceding paragraphs, suggests that rolling up anything less than SKILL 10 is going to end with the adventurer dead at the hands of the dice rather than YOUR decisions. I’m sure that mid-1980s kids did write ‘12’ into the SKILL boxes by habit – I know that I did, but then I also held my fingers in pages to take back unwise choices. Designing an adventure with the expectation (or requirement – Creature of Havoc!) the reader cheat is, however, only going to frustrate 30-odd year old readers, 20-odd years later, who are trying to play the game by the rules!

These combats reminded me my misgivings about using Advanced Fighting Fantasy 2e as an engine for a campaign. The consequence of using a 2D6 system, because it produces a bell curve distribution of results, is that when one character has just a couple more points of SKILL than another the difference is almost insurmountable in the repeated ‘opposed skill test’ of combat. The issue isn’t that a skilled fighter more often than not defeats a less skilled fighter – we’d want the system to do that. The issue is that the range of SKILL values in which a combat is still some kind of a contest is so low, a problem exacerbated by the ‘opposed skill test’ nature of Fighting Fantasy combat, where the one test incorporates both combatants’ attacks, meaning that the one with the higher SKILL is the only combatant doing damage.

Okay, AFF2e introduces a whole bunch of modifiers to the dice rolls to allow the adventurers (and monsters) to ‘act’, rather than ‘roll’, their way out of trouble. But when increasing a ‘special skill’ is pretty low, that characters will have an effective SKILL of 10+ in a short period of time looks a pretty likely outcome. Caveat: while I’m hoping to run a couple of games of AFF2e over Easter, I doubt that’ll be enough to get a feel of the advancement system in action.