A Complete Game in Four Parts

Of all the D&Ds, Frank Mentzer's BECM is the one that is closest to my heart. I leave out the 'I' as I never owned the Immortal Set. In fact, as I describe below, I'm not sure that I've ever needed the Master Set as part of my 'complete game'. Certainly I've never played in a campaign that has got beyond the 'teen' levels. Part of the reason that I hold these slim books in such high regard is, no doubt, nostalgia. In the 1980s we got a tremendous amount of play out of just four books – the Basic Player and DM books, the Expert book (which is my favourite D&D book of all time), and the Isle of Dread. We fought our way up from frightened dungeon grubbers, we travelled all across the Known World, by horse, ship, and – later – a variety of flying monsters, we built castles, ruled domains, and lead armies into battle (we didn't have the Companion set at the time so we made up our own rules, which isn't that difficult in an AC/HD system). We could do all this because BECM D&D is a wonderfully complete and well organised game that supports this range of fantasy adventure with a number of simple but effective play procedures. 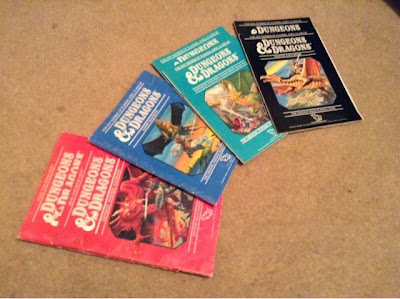 "Well organised?! It is spread across seven books!" Sure. But do not overlook the virtue of procedures organised by 'tier'. First, it stops players and DMs being overwhelmed by trying to master rules and procedures that are of little to no relevance for their own games. But second and more importantly - and this is something that is missing from plenty of more serious, comprehensive games - it makes material the idea that the kind of adventures that a PC might engage in will change, as they grow. This change will be qualitative as well as quantitative. Play at higher levels isn't just about fighting bigger monsters for more magnificent treasures (though both are there, if you want them) but about different kinds of adventure altogether. The PCs are a 'real' part of the world. In my opinion, if 'serious' D&D has to be three big hardbound books, it would be better for the game (though not for WotC’s bank balance) if the material – the procedures that make up the game – was organised by tiers of PC power (and where these tiers mean something other than the addition of more kewl powerz) rather than the now standard PHB, DMG, MM division.

Second, do not be fooled by the fact that these rules are spread across seven books. Each book is a pretty slim volume affair. I can use the weight of most RPG rulebooks to press flowers - if I was into that - and many RPGs don't settle for just one big book. These? I couldn't squash an ant with these books, even one on top of the other. Yet within these books there are not only the systems that are found in any fantasy adventure RPG - character creation and advancement, magic, equipment, combat, monsters, etc., but a whole raft of simple procedures that cement the place of PCs within the game world. My expectations of an RPG have been so coloured by the comprehensiveness and scope of BECM that I find other games inadequate in this regard (and end up porting in BECM D&D's procedures to fill in the gaps).

From the Basic DM book we have a procedure for dealing with retainers (BD20), a system for handling the reaction of monsters and NPCs (BD22), treasure tables that provide us with a system of determining appropriate levels of reward with the context of a D&D game world (BD40-42), a system for generating room contents and random treasures (BD47), and a system for determining whether the party will encounter wandering monsters, with sample wandering monster tables on the inside back cover.

The Expert book, as we all know, introduces wilderness travel and adventure (for example, encounter tables on E30 and 35, getting lost etc. on E41), but it also includes procedures for allowing PCs to build castles (E23), hire mercenaries (E24), conduct magical research (E25), as well as adventures at sea (E42-44).

The Companion book brings us rules for ruling Dominions (CD5-10), fighting wars (CD12-17), and, for those higher level PCs without the taste for rulership, guidance for engaging in adventures across other dimensions and planes of existence (C18-20).

And, given that in BECM we’re not talking about a race from 1st level to name level in just under three weeks of actual adventuring (which, judging by the release of the free DMG pdf is the assumption of 5e), the Companion book also introduces some rules for aging (CD25).


In other words, across a handful of pages (not many - count 'em!), using pretty simple systems of resolution (okay, the Dominion rules could have done with a serious trim), we have the procedural skeleton on which a can be built play a campaign in which the players can enjoy their PCs exploring, shaping, ruling, and travelling beyond the game world.

And while AD&D churned out adventure module after geographic guidebook after splatbook, the BECM D&D supplemental line included material that further cemented the idea that this was the D&D for extended, meaningful sandbox campaigns. The C and M series of modules often involved the PCs not only as adventurers but as rulers. Hidden in the GAZ series was material than made them something more than mere geographical guidebooks and sources of variant Class options - consider the trade rules from the Minrothad Guilds and Darokin supplements. And in Red Arrow, Black Shield, the PCs were invited to take a meaningful, consequential part in a continental war - in the war itself, mind, which was not 'merely' the background for a quest for a MacGuffin.

[Of course, there are a few things that I don't like about BECM. It is not the perfect D&D. Central to my complaints is the lunatic level spread (36 levels!), and the fact that that level spread is partly responsible for producing the worst iteration of the Thief class in any D&D.]