So, I have established the key concepts that I am borrowing from Titan. As I wrote, these are the sort of things that I must continually remind myself of when building the world of Hammerstein!, else it degenerate into pseudo-historical beige, unfit for adventure. But what about Mystara – the D&D world so lovingly detailed in the Gazetteer and Creature Crucible supplements, and the Voyage of the Princess Ark? What can I take from this world, and what must I rule out? 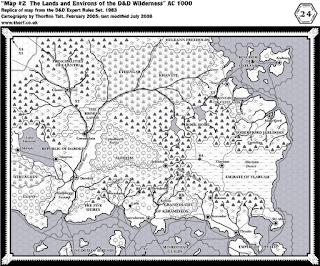 
1. Pseudo-Vikings as neighbours to mock-Arabia, which is right by fantasy Rome, is a feature not a bug. Variety is the spice of play. Every place should have a strong ‘theme’ – who wants to trek through umpteen ‘realistic’, barely distinguishable medieval towns? – and there need not be a ‘realistic’ logic to their arrangement [All the Gazetteers, essentially]. This complements onto point 3, 4 and 5 of the Titanic Lesson Plan.

2. The world is post-apocalyptic, and conceals hidden cities [B4 The Lost City] and lost valleys [B10 Night’s Dark Terror]. There were once powerful civilizations, and their treasures and secrets are waiting to be discovered, as well as their twisted, degenerate remnants [see also the DA Blackmoor series, and the Azcan, Oltecs, Nithians etc. of the Gazetteer prehistories and the Hollow World]. In Titan we have the War of the Wizards, Carseopolis, etc., but the more thoroughgoing the apocalyptic prehistory, the more dungeons there are in the world. See point 1 of the Titanic Lesson Plan.

3. Ships are cool. When, thousands of years ago, I moved on from the dungeon bashes of the D&D Basic Set and opened the blue box of the Expert Set, I was immediately excited by the idea that adventurers could not only explore the forests between the town and the dungeon, but they could buy, hire, or steal a boat and journey to the Isle of Dread. Or the Island of the Lizard King. Or explore the Seas of Blood. Sea travel, especially to islands, presents the possibility of filling the world with unexplored areas, and with cities and cultures that are radically thematically different. Again, this can keep the world small, varied, and civilization isolated (points 3, 4 and 5 of the Titanic Lesson Plan). Also, pirates.

4. If ships are cool, flying ships are cooler (but rare) [the Voyage of the Princess Ark, PC1 Top Ballista!]. These are present in Titan, too; there is at least one, the Galleykeep [Creature of Havoc, The Trolltooth Wars].

5. Mageocracies are fascinating. In small measures. Thus, Glantri > Alphatia. In a world of magic, at least some places will be the domain of wizards and sorcerers. Not all of these powerful magic users will be one of the multiple big bads of Titan. Indeed, given that the world is inherently fantastical, magic plays an important role in all societies, even those that are not ruled by magicians.

6. And finally, for now, adventurers are rock stars (see point 8 of the Titanic Lesson Plan). The only way I can fit something like GAZ 4 The Kingdom of Ierendi into a world that I could comfortably run is to combine Ierendi with Titan’s Fang [Deathtrap Dungeon and Trial of the Champions], maybe with a dash of Blood Bowl. Many adventurers are motivated by fame, more than they are by power, or even money. They are psychologically different from normal people, even ‘normally’ powerful people, the kings, generals, merchant-princes, thaumaturgic professors and bishops of the world. As an aside, in a world of magic, gods, and demons, it is entirely right that these non-adventuring powerful people are more often than not ‘high level’ (or game equivalent) people in their own right. The D&D standard of having all bishops  be level 9+ clerics, all kings as level 9+ fighters, etc. makes more sense (see counter-lesson 2, below) in this kind of world (while it certainly doesn’t in settings that attempt to emulate a historical period with a bit of magic glossed on top), as long as there is the XP mechanism for advancement other than by adventure. This path of non-adventuring advancement could be just for NPCs, though I dislike systems that mechanically differentiate PCs from NPCs, or from monsters even.

There are, however, two things that I cannot take from Mystara when building the world of Hammerstein!

1. Nations. The whole of the Known World is covered by nations. With borders, routes of communication, standing armies, etc., it is difficult to envisage that civilization exists as points of light amid fantastical peril, or that the world is small world but fantastical threats make travel perilous [points 3 and 5 of the Titanic Lesson Plan]. Cities might cast a civilizing shadow on the nearby countryside, but actual nations should be unusual and/or loosely bound.

2. A preponderance of high-level characters. “What? You’ve just written that high-level characters are justified.” Yes, I suppose this is a system rather than setting problem. It depends on the power scaling of the game. The power scaling of D&D works better in world where almost no-one is name level (which is always the impression that I got from AD&D1e, with the low demi-human level caps implying, to me, that even though humans could go further, only the superheroic did so). In Mystara, there are thousands of 36th level magic-users, and that’s just for starters. In a game world in which there are tens, perhaps hundreds, of thousands of people with high-level adventuring skills, what is a PC to actually do? However, in a game where even ‘high-level’ characters are vulnerable (WFRP, AFF2e, or a BRP/RuneQuest game, somewhat like OpenQuest, say…), having 150% in close combat or knowing a vast array of sorcery spells is all well and good, but you’d much rather those crazy adventurers dealt with the dragon than risk your 15 hit points…

I’ll get round to what I want to borrow from the world of Warhammer soon.