A month of DBA #6 - the first elements

Okay, so I'm not making quite the progress in my 'Month of DBA' as I had hoped. It was, after all, an absurdly ambitious rate of miniatures per day. And, but damn, the Essex miniatures are absurdly detailed sculpts for 15mm. I own models from a few other manufacturers, and none have the detail, especially on the faces, that the Essex minis have. And there is also the variety. Essex's Middle Anglo-Saxon army pack includes a bunch of DSG5 and DSG6 spearmen (as below, the 6s are the ones with the helmets), and - if I have counted right - there are 11 different miniatures.  this means that I've devoted more time per mini than I had envisaged at the start of the project. Nevertheless, I think that extra effort has meant that I've done a pretty decent job: 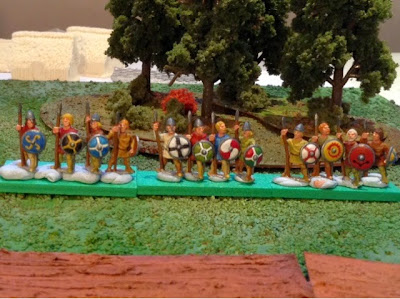 (Apologies for the picture, as usual. I need something better than an absurdly unwieldy iPad camera - taken while holding a table lamp in the other hand!)

Question One: Do I slosh Devlan Mud all over them?

I'm particularly pleased with a couple of the shields, particularly the red dragon on yellow and the, erm, eh... yellow 'swastika' on blue. With the latter, I was sitting there, eyes crossed, tongue sticking out the corner of my mouth as I doodled the design. Then I held the finished little man are arm's length, blinked, focused, and said, 'oh, bugger!'

I am very much enjoying painting these 15mm miniatures. I have to confess, it has led me to scour the net, identifying 15mm fantasy and sci-fi figures for future projects. But there will be no other 'hobby' projects until there are fully painted, terrain-rich Dark Ages battles being fought on a 2ftx2ft landscape.

But thinking ahead to future 15mm gaming...

Question Two: What do people base their individual 15mm miniatures on?
and
Question Three: Does anyone play Warhammer Fantasy Battle in 15mm?

Is it too much hassle dealing with individually based miniatures at this scale. I suspect so - it is quite a bit of hassle dealing with individually based miniatures in the big WFB units, especially casualty removal. You end up with the units being 'collectively based' on movement trays, which, after a few casualties have been caused, end up ugly and exposed, and which also inhibit changes in formation (psychologically at least, "oh, my, what a fuss!"). I guess I'm talking myself out of both individual bases and playing WFB at 15mm... So:

Question Four: What other games can be played with DBA-based 'elements'?

I'm aware of Hordes of the Things (and can see a use - one day, one day - for all my 25mm Lord of the Rings minis - too few to make an army for the GW game, but more than enough to make a 24AP HOTT army).