Painting in 15mm has revitalised my interest in miniature painting. But I have to paint 40 Saxon spearmen before I have finished that contingent of the army - plus 14 irregulars for the two 'horde' elements, two skimishers, and the four housecarls that that make up the general's element. I'm 20 spearmen in, and need a break. So what is in the lead-pile? 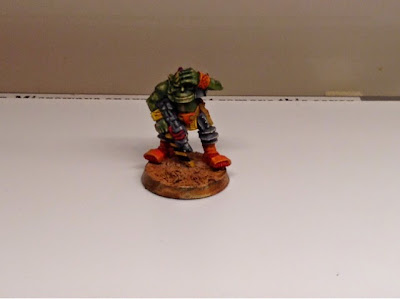 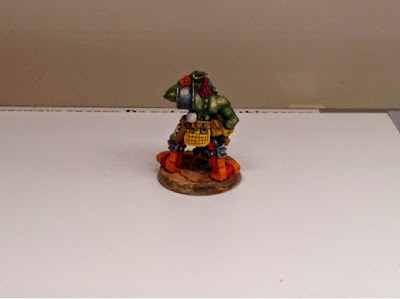 He is meant to be part of this gang of old metal space-greenies... which I last put to the brush TWO YEARS AGO! 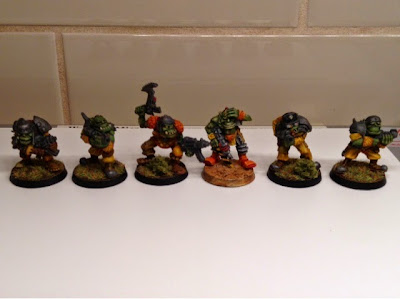 (I have found a great new place to photograph my minis - on top of the microwave directly underneath an LED downlighter. This usually has the mundane but essential task of illuminating the kitchen worktop to help my late-night sandwich making, but it serves quite well here.)

After painting 15mm tall realistically proportioned little men, this guy was a breeze.


As you can see, he's a bit lighter than his buddies, but then he is prone to walking about topless, and who knows what the effects on light from a red giant does to an Ork's complexion. Maybe he just needs a green wash... and possibly a touch of metallic paints - the earlier models were painted when I used metallic paints more heavily.

I'll be back at the Saxons the next time the paints come out. That's THE hobby project (not just for this month, but for the summer), and I know 'the game' that I will be playing with my Saxons and Vikings. By contrast, I'm not sure what I'll actually use these guys for. I don't think that I have the stomach for current 40K, and I while I have Rogue Trader - and leaf through the book regularly - I'd expect that I'd find it too fiddly these days. I am taken with adapting (or stealing an existing adaptation of) one of the Songs of Blades and Heroes variants for some real quick-play skimishing, but not sure if I'll have the players.