Player Notes #1 - The Crown of Kings

I guess it is is going to get a little monotonous if all you read here are the fairly ordinary modelling and painting experiences as I work towards my DBA project. See here's something else. But don't worry if you wanted to see what I put together for a forest, or a road, or a Saxon village, etc. etc. You have all that to come!

But back to roleplaying, for a moment. As a referee, I enjoy watching players scribble down notes. Players committed to taking notes, are, I presume, engaging with the game in both the short and long term. Can a player sort one improbably named NPC/location/monster from another? If they can't, their experience of the game can only ever be superficial. But who expects either players or referees to hold all this in their head. The referee orders the world with piles of notes and index cards, unless the players adopt something fractionally similar, it will be difficult for them to make their decisions meaningful, and therefore, in one sense, make the game as arbitrary as Snakes and Ladders. Of course, not all players are into noting down NPC names, rumours, clues, etc., but unless they have a very good memory, those who are not taking notes need to understand, and accept, the limits this places on their ability to act in and engage with the game world. Roleplaying games are information games.

All that aside, the purpose of this post is to show off some pictures of the ways in which players in my games have made sense of the game world. The most ardent note-taker and mapmaker in our group is my wife. Here's some of her notes from our Advanced Fighting Fantasy Crown of Kings campaign. 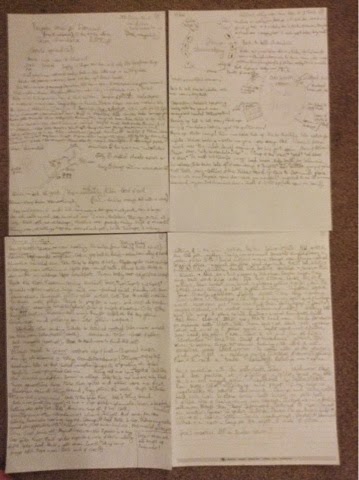 Addendum: A dense transcription of names, places, hint and clues. But because she was the only player taking notes, rather than having three players, each collecting and organising the information that they think is important, for all of the players the game was refracted through these notes. It is not so much of a problem in a linear 'quest' game, or even a 'straightforward' mystery, in which the decisions are mostly short term and the goal is shared by all the players/characters. But it occurred to me that this delegated approach to the 'information game' is very bad for a sandbox game, in which each player is expected to make short, medium and long term decisions that are not determined by the pursuit of a simple, predetermined collective goal.