Last year I bought Inkle's first Sorcery! app, which turned out to be a reasonably faithful adaptation of The Shamutanti Hills gamebook. There were a few flourishes here and there that, as far as I can remember, were not in the gamebooks (for example, the motivation for the goblin activity is fleshed out), but aside from the gorgeous map and the nifty, but straightforward mechanics, this was The Shamutanti Hills. If you liked the gamebook, you'd like this. But if not, this would fail to satisfy for similar reasons (unless you have something against books as physical object, but then...).

Sorcery! 2, based on Khare: Cityport of Traps, is, however, a totally different beast - though it wears the same skin. My memory of gamebook Khare is of a city that defies reason, filled with fantastical encounters (but little else) in which Bizarre Search Behaviour (as described by Murray of Turn to 400) is the order of the day. And it is fun, for sure, and very 'Fighting Fantasy', but as is the case for many of the gamebooks the only way to collect the information necessary to make meaningful choices is to die. YOUR adventure ends here.

In the Inkle app, Khare feels like it has some real life to it. Part of this is down to the technical possibilities presented in by an app that would be impossible in a gamebook; it is not so difficult for later 'sections' to be subtly (or not so subtly) tailored in light of previous choices - certainly without doubling or trebling the 'section' and page count of the equivalent physical book. But Khare has also grown. What appeared, in the gamebook, to be disconnected encounters have grown into the spaces around them, producing meaningfully interlinked choices. But there is also more to Khare - political intrigue and underground plots practically beg YOU to investigate. It feels much more like a sandbox setting. 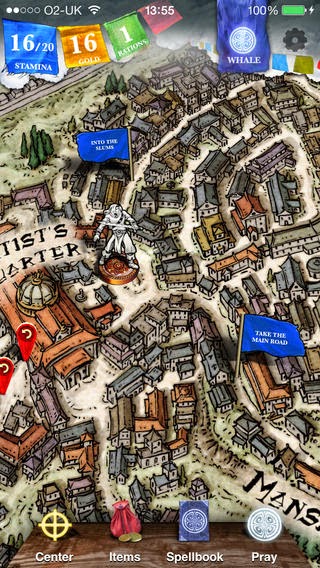 All of this is managed by an automated clue 'inventory'. This records bullet points of information that you gather through your searches and conversations. On the subject of the latter, at various points in the game you have the option to play 'swindlestones' (liar's dice) against a number of different NPCs. While you can try to use this as a way to make some gold, its true usefulness comes in the conversations that you have with the NPCs as you bluff and bet. Different bets produce different dialogue options, meaning that sometimes you just have to bluff big (and likely get called) if you want to ask a particularly probing question. This is a really good mechanic, introducing risk and reward (and a degree of transparency about both) into the information game.

As far as the other mechanics go, swordplay is still, as it was in the first Sorcery! app, a 'blind auction', in which you try to use just more of your strength than the enemy, or none at all if you suspect that he will 'bid' higher. While there are some clues as to what the enemy will do each round in the text description, it still feels pretty formulaic - thought it allows for some player choice, the meaninfulness of these choices is minimal, once you have your PC settled into a strike-block rhythm. It is certainly appears to be more interactive than 2d6+SKILL, but I feel that adding a couple of choices to modify this roll (as in Advanced Fighting Fantasy 2e) would have produced more genuine choice into the fights. Each fight can be endlessly refought until you have achieved a level of STAMINA loss with which you are happy, which feels a bit 'fingers in the page' to me. Nevertheless, I have used it... 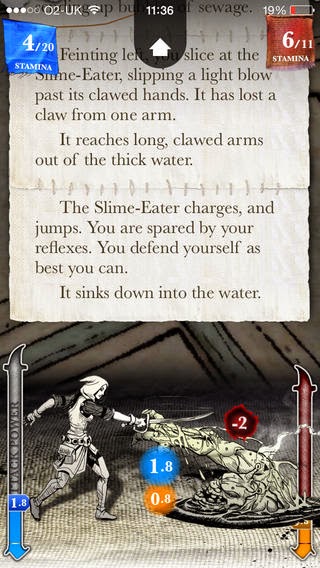 The sorcery mechanic has been revamped across both apps. If I remember right, in Sorcery! it involved a mildly annoying mini-game in which you lined up the three letters of the spell. This was nothing more than a time-sink hurdle for the player - you would line the letters up eventually, and it didn't matter how long it took. Well, it didn't matter for YOU - as in your PC - but it mattered to you, the player. This was a mild example of what I was talking about with regards to the consequences of failure in RPGs and computer games. The new version retains the same visual charm - the letters being written in the stars - but the mini-game is gone. Just tap out S-U-S and burn on point of STAMINA to work out if Steve Jackson has set a trap for you. That really is the most important spell any adventurer on Titan can learn!

I was really impressed with Sorcery! 2. It looks fantastic, plays smoothly, and the new material adds extra life to the city, though I'm still in two minds as to whether the extra stuff included by Inkle dilutes the Titanesque. Regardless, I do wish that I had played this before running the Khare section of the AFF2e Crown of Kings campaign. I guess that is the highest praise that can be given by a GM!