A month of DBA #7 - mighty empires or petty kingdoms

I'm getting a bit carried away here, but as I slowly work my way through the two armies that arrived in a small padded envelope I have the opportunity to think ahead. Painting in 15mm has rekindled my enthusiasm for miniature gaming - and coupled with the fast-play rulesets that I have now had time to read through I can imagine playing very regularly, rather than the very irregularly that had been the case with 6ftx4ft Warhammer Fantasy Battle gaming. The economies of scale, time and well, cash, means that regular gaming is simply a much more realistic proposition for gamers with kids and all the rest of that grown up bumpf.

Nothing worse than a convert, eh? None of the experience that renders one critical, even jaundiced...

Even so, browsing around the Fanaticus site I found an adaptation of Games Workshop's Mighty Empires to DBA rules. Fantastic, cos look what I have sitting in my cupboard: 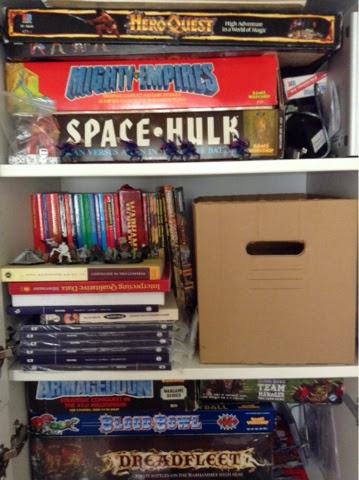 I never played Mighty Empires as a campaign architecture for WFB. I couldn't fathom the amount of time that would require. But Mighty Empires as a system for adding depth to a DBA/HotT campaign? Now that would work, wouldn't it? [That's half a rhetorical question, and half a question looking for an answer - playing electronically, via DBA online is not necessarily a good simulation of the practicalities of playing.]  Depending on the level of aggression, I would imagine that you could easily play out a couple of years of a campaign over an evening. And in an age of digital cameras, taking a record of the arrangement of all the oversized hexes, and the location of the units, settlements and counters is straightforward. Back in the day, if you wanted to pack the game away and continue later you would have needed to laboriously note down the locations on paper, or take a roll of film down to Boots.

So I was thinking of a Mighty Empires DBA 'Petty Kingdoms' game, with armies representing the Welsh/British, the Saxons, the Picts, the Irish, maybe the Vikings and Franks - depending on player interest - all on some fictionalised hex map of the not-quite British Isles. Fictionalised, as I'm thinking that I'd get greater player buy-in if the game it set up to maximise gaming fun, rather than historical accuracy. But once we go fictionalised, couldn't we (shouldn't we) add in some mythical/legendary elements?

And that is the point at which I came across Steven Balagan's excellently prepared DBA/HotT lists for Britain AD600. I'm perfectly willing to stretch the time period by a couple of hundred years to accommodate this only pseudo-historical game. Steven's lists include suggestions for the incorporation of HotT elements - Gods, Heroes, Magicians and Clerics, Behemoths and Beasts, Lurkers and Sneakers, into appropriately themed 'historical' lists. Hopefully that will at least address some of the criticism from D, who complained that historical wargaming wasn't as 'open' as fantasy.

Or, of course, we could just do 15mm HotT 'Warhammer' using Mighty Empires. The Demonworld miniatures from Ral Partha look just about ideal.