The Rise and Fall of a Hero


I've been reading more Tom Holland history - Persian Fire. Tom Holland's books are always great gaming inspiration, and I ended up on Google Plus I was asking about Bronze Age-inspired (or at least Antiquity-inspired) OSR games/supplements. By way of a few recommendations, that led on to me asking for opinions on Barbarians of Lemuria (which has a mythic Greece supplement, Heroes of Hellas), which prompted Alex Schroeder to say:

“Ah, the magic system was another thing I didn't like too much. It's too freeform for my taste. I like well defined spells because these are part of the ever changing nature of a long campaign. We know that eventually we'll fly, be invisible, walk the planes, speak with the dead, and all that. We don't do that right away, and it doesn't depend on referee fiat. It's a "promise" that is made by the rules themselves. Free form games just don't offer that.”

Alex has written about this before on his blog. He has a point. It is important for long term campaigns – for my tastes anyway – that the game itself offers the mechanics for different sorts of gameplay. Which was why one of my questions was does Barbarians of Lemuria handle Conan the King as well as Conan the Adventurer...

But changing gameplay over time is almost always imagined as ever increasing power. What about the decline of the hero? The decline of the hero is a venerable feature of fantasy and legend – the once unsurpassed hero is challenged by upcoming warriors, or must face one last quest with fading capabilities. And then there is the other trope – the once proud champion grown fat, lazy, or drunk. 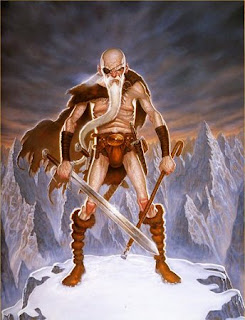 D&D is bad at representing this. A 9th level Fighter is still a 9th level Fighter, even if you use aging rules to knock a few points off her Strength. I presume it is even worse in later D&Ds, in which Strength etc. increase as PCs level up. A BRP-based game should do better, as with things such as Damage Bonus and Hit Points being directly derived from a PC’s Attributes, these will dwindle even as her Skill percentages remain high. WFRP, in which Skills are binary (you have them or you don’t) with success governed by Attributes should do even better, though I’ve never seen any ageing rules for 1e or 2e, even if a collection of old wounds might do the trick for most PCs.

So my question is this; which game is best able to handle the decline of a PC as well as they do the rise?

I've been busy. I've been away this summer in the USA. The first trip was to Phoenix, the second to South Florida. And I can honestly say that I now 'get' D&D just a little more.

I was amused by the old Games Workshop/Citadel ads in Dragon, which used to tell the Americans that they ought to buy their games from people with 'real' history. It chimed with my own prejudices. I still chuckle with a sense of wrongheaded superiority at the fact that the terraced house that I lived in (until this summer, a housemove has also put a dent on my blogging) was about 130 years old. Which isn't that old for a house in the UK, and certainly every other house in the area was about that old, yet in parts of the USA it'd probably have a plaque from the local historical society. And my taste in game worlds does tend to be very European. Very British, even. Legend, the Warhammer World, (even Titan to some degree), all seem to capture a greater sense of historical 'place' than the Forgotten Realms, say.

But it doesn't matter. Unless we're playing a pseudo-historical game, in which of course, it does. But D&D isn't always pseudo-historical, and is (I think) at its best when it is not, despite the pretensions of the AD&D1e DMG. It is an American game.

Yes, yes. I have long been aware of the 'borderlands' theme of American history. A history of explorers, of pioneers, of the 'civilizing' mission (winning the West) which was conducted peicemeal as much as imperial. And, of course, the American West provides us with some archetypal examples of murder-hobos. So, yes, a ripe historical analogue for D&D PCs, if we can get past the racism and genocide. But hey, just chuck in Orcs and we can all sleep easily, no?

But I didn't fly over Arizona and find myself struck by the history. No. At least not directly. No, I flew over the desert and found myself struck by the quite awe-inspiring scale that pervades the USA. The USA - and the Americas in general - has a scale about it that is quite unlike that of Europe, and Britain especially. I don't just mean its continental vastness, nor the buildings, people, or even the military-industrial-prison complex. As I flew into Phoenix I passed over canyon-laced desert that resembled, to European eyes, the landscape of an alien planet. I didn't need to know much history to immediately wonder what the first Europeans had thought as they crossed this landscape with their pack-mules laden with equipment, accompanied by their hirelings. And the heat! The heat! It was so hot that I remarked that if it is ever that hot in Wales then your house is on fire.

In Florida there was a different kind of heat. A wet, swampy, (once) malarial heat, in a flat marshy landscape prowled by man-eating alligators. To get some breeze you get to the coast, and escape down a chain of islands a hundred miles long tipped by a wrecker 'city' - the richest per capita in the USA at one point - precariously clinging to an island made up of the skeletons of weird sea creatures, just waiting to be swept away by hurricanes (or pirates).

Something twigged in my brain on these trips, as this wasn't a medieval England of innumerable villages, each a day's walk from the other, a landscape tamed and human-ized, however ancient. This is a landscape of awe-inspiring scale, and to a European, strangeness. A landscape of isolated settlements, both those of Native Americans and European Pioneers. A land of radical heterogeneity - of religion and ethnicity, as well as environment and economy -  with adventurers building quasi-states in the borderlands. I imagined the amount of planning and calculated risk taking required to explore this new world. Wilderness expeditions, full of strange landscapes, a hostile environment, and encounters with peoples and animals that could roll either way, depending on their Reaction.

Yeah, I've only been playing D&D for about 30 years. I spend about three weeks in the Americas and now I get it a bit more.
Posted by Andy Bartlett at Monday, August 17, 2015 14 comments: