So, the plan is that by presenting the players with, at first, a small number of choices for their characters, we will slowly build the world through play. As we build a common understanding of the people, factions, locations, and logic of this world, the players will, naturally enough, be able to see a wider range of possibilities for action. Unfortunately, I've been very busy lately, so these three adventure seeds have been taken from published adventures (no point having a couple of cupboards of stuff if you're not going to use it). Names have barely been changed, if at all, but what actually happen might vary. *Will* vary, if for nothing else that all three were written for quite different systems. Here's what I presented to the players:

With your last silvers, you have formed the Respectful Companye of Gentlemen Adventurers. While dossing about in the various dives that serve as social clubs and job centres for 'resting' 'professional' adventurers, you hear a variety of rumours.

A notice is pinned to the board in the Copper Bottom Inn in Docktown. It reads, 'Capable persons required to protect valuables. Well paid, food and board supplied. Contact Utho the Landlord.' Asking a few questions, you find the notorious inventor Wolfgang van der Kugel (great-grandson of Wilhelm van der Kugel, pirate/engineer and builder of the harbour barrage) is being harassed by extortionists, and in keen to employ 'adventurers' to put an end to this problem. He is offering 100 silver pieces per adventurer, payable when the problem is solved.

Widow Thanato, of Docktown, is complaining of demons in her house. She insists that something is eating the contents of her root cellar. She says that she can hear it moving about and growling at night. Widow Thanato is poor – there is no reward for dealing with her problem – but she is a popular, well-known figure in Docktown. And she is a close friend of your landlady, the Spinster Grunhilde.

Sariedo, a merchant of some repute, is known to be looking for adventurers. He is offering a large amount, 500 silver pieces per person, for a party to recover an item from the Belch for him. He warns repeatedly of the risks that adventurers might face, but always jingles his purse as he speaks of danger. When pressed, he tells more; he wants the party to recover a fist-sized amber gem that he believes is hidden in the cellars beneath the ruined storehouses in the Monastery of Righteous Revelation. He offers to pay 250 silver pieces to the party up front, and the adventurers can keep anything else they find.

My players, however, appear to lack the mercenary instinct. Of the four, two have so far replied - the barbarian acrobat (played by S) and the warrrior from the Contemplative Empire of the Egg (played by A) - and both have opted to help the widow.
Posted by Andy Bartlett at Tuesday, April 24, 2012 5 comments:


From Lloyd of Gamebooks' admirable alphabetical interview series, this time with Murray of Turn to 400.

"Why are gamebooks great compared to games or books?

Most games have a totally rubbish story. I don't know if you've thought hard about what happens in Ludo recently, but it's all bullshit. And the plot of Texas Hold 'Em? Horse-shit. Whereas the weakness of books is that they have almost zero replay value, and normally YOU are not the hero, unless you can be bothered writing the book from scratch and putting yourself in there like the lady did with Twilight." 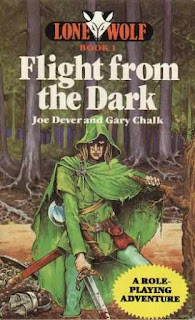 Posted by Andy Bartlett at Saturday, April 21, 2012 No comments:

Hope for the Future

As I watch the Tories try to turn Britain into a crueller, less equal, more brutal country, I am often depressed. And, worse, everyone these days thinks 'roleplaying games' are World of bloody Warcraft, or Skyrim, or any computer game with a levelling system and inventory management. But there is hope for the future! Yesterday, as I opened [one of] my gaming cupboards, my two year old daughter screamed, 'Dungeons and Dragons', and danced about literally shaking with excitement.

She means my big bag of dice (AKA choking hazards), not the rows and rows of vintage RPG books. But she loves to roll dice, and that's a start.
Posted by Andy Bartlett at Friday, April 20, 2012 2 comments:

Look, it’s really not that bad. Okay, okay, it IS a bad film. It’s no worse than many other early 80s fantasy movies, but that’s about a faint as praise gets. What Conan the Destroyer is, is a good D&D movie, a far better D&D movie than Conan the Barbarian. 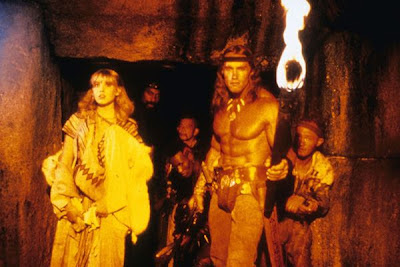 Not sure about the armour classes here... maybe Conan is wearing Frazetta Oil.
In Conan the Destroyer we have a party of four PCs – two fighters, a thief, and a magic-user – on a quest, accompanied by two NPCs – a zero-level princess and another fighter. They travel across the wilderness, have a one or two encounters, and raid two ‘dungeons’. One is the home of an evil sorcerer with a set piece ‘trap room’ full of magic mirrors, the second is a lost temple from which they must recover an ancient artefact. The adventure culminates in a battle against a Lovecraftian minor ‘dreaming god’ in the throne room of a palace. If this was one of the X-series of modules it would totally ROCK! Honestly, it would be up there with Night’s Dark Terror. You just need to throw in a few more encounters in the ‘dungeons’, and to add a few more minor adventuresome locations in the wilderness and you have a fine mini-campaign with an old school feel.
Reading fantasy fiction and watching fantasy movies I am often inspired by even the worst. However, I always have to remind myself that a good game of D&D (or any other FRPG) shouldn’t try to be a recreation of a good film, or a good book. The worlds invented for films and books are not good worlds for gaming. They are there to tell one, and that story is one that is determined, written, fixed. Unless you are playing a game in which you know that the PCs are the Fellowship of the Ring, Titan is a far better gaming world than Middle Earth. If you know before you begin that the PCs are the Fellowship, then you know the story that you need to tell, and the dice you need to fudge to help them reach Mount Doom. If the aims and adventures of the PCs are to be determined through play, you need a world quite unrealistically full of adventure, a world that is probably quite unsuited to being the setting for any ‘serious’ fantasy fiction.
Posted by Andy Bartlett at Tuesday, April 17, 2012 2 comments:

These Bandits are Different 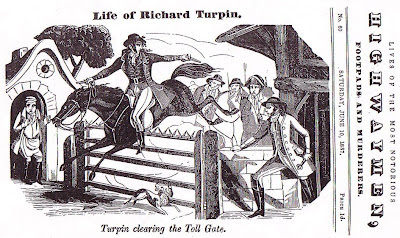 How much gonzo, how much humour, how many pop-culture references, do you like in your games?

I've recently been sneaking a bit of playtime on Age of Fable, a game that features talking frogs, the River Phoenix and the Forest Gump, and ominous scarecrows that are outstanding in their field. Nevertheless, or perhaps because of this, Age of Fable manages to be a very engaging game.
Posted by Andy Bartlett at Thursday, April 05, 2012 No comments: