AFF: I'm a man of many talents

...but posting more than every few weeks seems to be beyond me!

AFF starting PCs are, by contrast, much more competent - they're called Heroes by the game, after all. They have a broad range of (Special) Skills, and a usually able to get by by their 'raw' SKILL alone. If you have three players around the table (AFF works best, in my opinion, with small parties) chances are their Heroes will have lots of overlapping competencies. So what sets them apart?

No, sorry. There is something else. AFF2e adds Talents into the mix. These weren't found in Dungeoneer (the first edition of AFF), but an embryonic talent system was found in the gamebook series - I know for certain they were to be found in Jim Bambra and Stephen Hand's Dead of Night, and that something very similar was found in Jamie Thompson and Mark Smith's Sword of the Samurai[1]. Indeed, the Talents from Dead of Night are translated into AFF in the Heroes' Companion, but the core rulebook lists 32 different Talents.

These range from Ambidextrous, Animal Friend, and Arcane... through to Swashbuckler[2], Trapmaster, and Weaponmaster. Not all of these are equally powerful. Many have an effect in combat - and AFF games will likely involve plenty of that - others, such as Status (punchline - the Aristocrats!), Natural Linguist, or Learned will find use in other situations... and the Director should pay heed to this. A player choosing these for their Hero should be assured by the Director that they will come into play at some point - but equally players should be reminded to *make decisions* on behalf of their Heroes that will bring their Special Skills and Talents into action.

As with Special Skills, there is no reason why a Director, perhaps in collaboration with their players, should not introduce more Talents, using the existing Talents as a guide. Talents could certainly be re-skinned and given flavourful, evocative names. There is no reason why, for example, Armour Training could be renamed Vymornan Legionary, though players and Director need to be on the same 'cheat sheet' when it comes to understanding what each Talent encompasses.

Players choose one Talent for their Hero at character creation. Non-humans might start with other Talents intrinsic to their species - Dwarfs and Elves both start with Dark Seeing. The Rhino-Man, given as an example of creating new Hero species in Chapter 11: Optional Rules comes with both intrinsic armour and weapon as Talents, alongside Strongarm from the standard list.

Talents in AFF are one of the little gems hidden in the system. Their nothing special, in themselves; they're not complex, or innovative, you don't read the list and go 'wow', but in play they can be used to effectively add character to your characters - I don't like players building intricate backstories for their Heroes, but using their Talent to give us a glimpse of their Hero's history? Yes, absolutely.

[1] One of the things that AFF has going for it is not just the material in Arion Games' own line of books, but the vast back catalogue of gamebooks (and fan created material). Some inspiration can be taken from the way in which the 'dead' Director (keeping with AFF terminology) of the gamebooks offers idiosyncratic methods of resolving actions and encounters, and lots of inspiration can be drawn from the straight, high-strength, system-neutral flavour - including great black and white illustrations that look great on the player-facing side of a Director's screen. Some of the later books might be a bit pricey, but the first 30 or so are normally pretty cheap.

[2] Stellar Adventures (AFF in space! - a complete game in its own right which does not need AFF2e to be played) does away with the Swashbuckler Talent and allows all characters to use their Dodge Special Skill to reduce damage. This is one of a number of (minor) improvements that Stellar Adventures introduces to the AFF system.
Posted by Andy Bartlett at Monday, June 24, 2019 1 comment:

Luckily, in AFF2e there isn't quite the proliferation of Skills that can be found in some games (I'm looking at you, iterations of BRP). Plus, having Hero competency based off a generic SKILL score rather than finely sliced into different skill ratings means that a PC doesn't end up being extremely able in one area while incapable in another closely related area (though I am of the opinion that when this does happen it is as much a problem of the players (including the GM) as it is the system).

Nevertheless, in the AFF2e core rulebook there are a whole bunch of Special Skills, grouped into Combat, Movement, Stealth, Knowledge, and Magical. It is here, with the Skill groupings, that I sometimes start thinking of AFF as a kind of 'Junior RuneQuest' (there's also some bits of Titan that suggest a RuneQuest influence). These grouping have no effect on the game, but can help players when choosing to allocate Special Skill points, organise Special Skills on the character sheet, and might point the way to simplified or player-defined Special Skill categories. 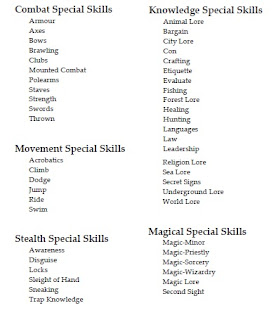 More Skills are added in the expansion books Blacksand!, the Hero's Companion, The Titan Herbal, etc. There is no reason why a player could not discard this list and simply assign points to 'areas of expertise' (in negotiation with the GM to make sure nothing too broad or narrow is selected) or even to 'sources of power' - want to have a PC that can accomplish things through their 'Love', their 'Curiosity', or their 'Beauty'? Well, why not make it as Special Skill and bring it into the 2d6 resolution mechanism - AFF2e is a pretty loose game, with resolution mechanics that are pretty 'abstract', so why not? If this doesn't sit right, these things could always be added as custom Talents (see next post).

Special Skills are rated between 1 and 6, with the rulebook saying that "A special skill of 1 point indicates someone who has had basic training, 2 points indicates fully trained, 3 points can be considered an expert, and 4 or more a master" (AFF2e p 25). This sits uneasily with the standard task resolution mechanism which is to roll under SKILL + Special Skill (or roll + SKILL + Special Skill if using the alternative 'roll under'. As such, I have thought carefully about the ways to understand SKILL and Special Skill in AFF2e. I'll not rewrite those arguments here, but will point you to the appropriate blog posts:

These posts preempt much of what I have to say with regard to the 'Game Rules' chapter of the rulebook, in terms of simplifying (and, in a some senses, expanding) on how to handle Skill rolls in AFF2e.

Next up: Talents.
Posted by Andy Bartlett at Tuesday, June 11, 2019 No comments: