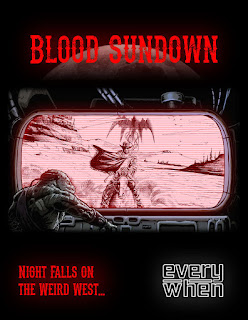 As an avowed Advanced Fighting Fantasy fan, I've been a big fan of Daniel Sell's Troika!, even though I've STILL not got it to the table. It's a really terrific 2d6 fantasy game built on the Fighting Fantasy chassis but very much doing its own thing. There are tons of reviews out there, but I'd like to point YOU (if I was to trust the visitor data, the YOU these days is mainly adult webcammers) in the direction of a nice little review by Jakob Schmidt HERE. 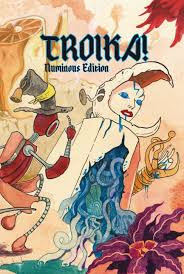 I was thinking about the bullet point format that has been (was? I'm well out of the loop these days)  discussed in OSR circles for a while now - basically digesting the sort of information found in the much maligned 'boxed text' (which I think is incredibly useful for new/rusty/tired GMs, but that's another post) and text for the GM's down into a series of bullet points. Sometimes these are presented as nested bullet points, so that the GM can see at a glance how one piece of information leads to another. Perhaps the extra information is revealed with time, by player questions, or through character action. I think this is an excellent format. [I can't find the original posts that got me thinking about this, but I'll add links if anyone points me in their direction]

This is done at the level of a dungeon 'room' or 'encounter location'. But years ago, running a WFRP game, I reflected on the 'placelessness' of my GMing. By this I mean that each inn, each city, each forest, each river etc. were almost utterly interchangeable. Except for 'plot elements', so to speak. Now, I'd like to think that I'm doing myself down, but I don't think I'm missing the mark by too much. And you could say that the 'plot elements' are what is important and that too much 'colour commentary' will mislead the players and take their focus off the important stuff. Perhaps. Nevertheless...

Nevertheless I want the players to get a sense of place, and movement, of travel when we play. To remember a place as more than just "where we did x or y". I am reminded here of a post from Monsters and Manuals - which again, I cannot find - in which he talked about the descriptions of travel and the countryside in LotR. I don't think a GM should try to ape this, but a GM can produce a pale, but effective simulation of the effect. To do this at the table, when I begin my next game I am going to assemble a 'sensational atlas'. This will be incomplete and ever changing, but in essence it will consist of a deliberate effort to identify a stack of descriptive words and phrases that can be used *without a great deal of thought* to evoke a particular location. Nothing else to get in the way. Just an index card for each location with smells, sounds, sights, even tastes and more tactile sensations when appropriate.

Emerald shadow of the canopy
Smell of rotting leaf litter
Thorny vines catching on your tunic
Constant hum of insects
Sweat dripping into your eyes
Trunks as broad as a cottars hut holding up the green
Vivid reds and yellows of sickly smelling flowers
Hooting, echoing calls and replies from the heights of the trees.
Thick undergrowth pulling at your boots
Sprawling ridge-like roots
Swarms of tiny flies crawling into your nose
Sucking mud of a boggy hollow
Crumbling, fallen log crawling with fat squirming larvae

and more more more, but no fat, nothing that isn't descriptive or, by my own low standards, evocative.

And so on, and so on. I'm no poet, but that doesn't matter at the table. A different card for each town, for each environment, and even, when possible, between different iterations of each environment. And these would build up during play, of course, as new descriptive details are added at the table.  I bet *you* already do this. But I need to formalise this process to ensure better GMing practice.But at the table, I could do with this kind of aide memoire, this kind of prompt sheet, to keep the game *in the world*.
Posted by Andy Bartlett at Tuesday, January 21, 2020 7 comments: