Or the other way around.

Characteristics such as wisdom, intelligence, and charisma – personality and cognitive characteristics – seem to present many role-players with a problem. They are often not tied so strongly into the mechanics of the game. They might determine how many spells you can learn or cast, or offer slight modifiers to reaction rolls, but their effects are not felt in the mundane mechanics of the average role-play session. Complicating this is the feeling that the activities that might be covered by these characteristics ought to be the proper domain of role-playing, not dice rolling. When a player says that his character will attempt to throw a goblin over a wall, a GM will ask the player to roll some dice. The GM will not ask for a demonstration. When a player says that his character will negotiate with a goblin, a GM will often ask the player to role-play this negotiation. 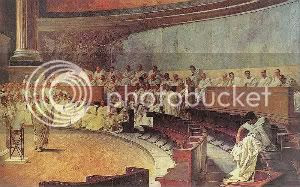 While Steve couldn't string two words together, never mind an argument, his character (Wis 17, Int 17, Chr 17) could speak like Cicero.
I want to protect characteristics such as wisdom, intelligence, and charisma from being ‘stat dumps’ by giving them more mechanical prominence in a game. But I want to do this without cutting the role-play aspect of role-playing games. That said, a clever player, playing a D&D character with intelligence of 7, who solves puzzles, engages in complex negotiations, and the like, is no more playing a role-playing game than one who devolves everything to a characteristic test. A combination of characteristic tests and skill tests, modified GM judgement of intrinsic difficulty and role-playing decisions is the best way forward, I feel. A player might make an impassioned speech when negotiating with the King of the Assassins, but if the character who is to be making the speech has a low charisma score that might not be quite what comes out of the characters mouth. We would not consider for a moment that there should be one to one translation from player action/stated intention to character action when dealing with questions of physical action. This is not just to hobble the characters of the clever, charismatic players, but to boost the characters of players who are not so quick witted or charismatic. Just as a weakling can play a Herculean hero, so can the shy player who stumbles over his words play the greatest demagogue in the Known World.
Posted by Andy Bartlett at Wednesday, July 21, 2010 1 comment:

In the real world, flags and standards are powerful items. A simple arrangement of symbols can evoke strong emotions; flags and standards can conjure pride, rally faltering courage, even generate fear. Some are sacred, and emotions generated when these flags are defiled points to the real power of these objects. And this is in a world where the only magic at work is the reification of abstract symbols by human cultures.
So why, in other worlds in which there are such things as magical symbols, in which heraldic banners flutter from every petty stronghold and trail from the lance of every knight errant, is there a paucity of magical flags?
In Warhammer Fantasy Battle (WFB), the power of flags is a standard (pun intended). Most units receive bonuses (magical and mundane) from the banners that they carry into the fight. But in Dungeons & Dragons (D&D), magical flags, banners, and standards are curiously rare. On US Independence Day, Dungeons and Digressions posted a list of some interesting magical flags that could be used in any fantasy role-playing game. I like the 'Flag of Allegiance' -

Those who behold this flag within sixty feet must make a saving throw or else are charmed by the flag bearer and will surround and follow him, protecting him and the flag with their lives if necessary. The spell is only broken if the flag should touch the ground or if the bearer can be interpreted in any way as disrespecting it. 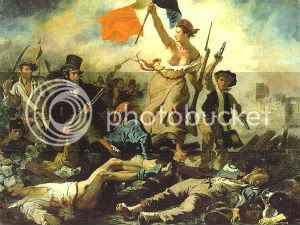 "Stop looking at my chest, Top Hat, and defend the symbol of La Révolution!"
I am thinking of the use of magical flags to defend cities, to protect ships, to hearten Orc raiding bands... and the sort of role-playing encounters these items could enable.
Posted by Andy Bartlett at Tuesday, July 06, 2010 No comments:

Blood Bowl is set in a Warhammer World. Not the grim world of Warhammer Fantasy Role-Play (WFRP), nor even the markedly lighter world of Warhammer Fantasy Battle (WFB). The world of Blood Bowl is violently silly. I do wonder what a game of WFRP set in this version of the Warhammer World would play like. There is enough background material in the various rulebooks, companion books, magazines, annuals, and even novels, to layer a Warhammer World devoted to the Cult of Nuffle over the grimdark world we already know. I would love to hear from anyone who has done this, whether for a one-off game or for a Blood Bowl-themed campaign. 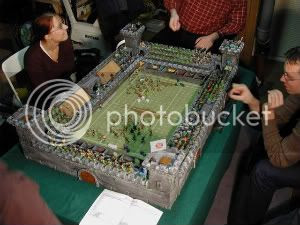 When they said that their home ground was a fortress...
A few days ago, D retrieved his 3rd edition Blood Bowl (and Dungeonbowl) and we played a human v dwarf game. His human team sported their 15-20 year old paint jobs, while the dwarfs rumbled across the field flashing their bare lead. The first half was played without the four-minute per turn rule; it is a little difficult to play to that rule when you are consulting the rulebook on a more or less continuous basis. By half-time it was 1-0 to the humans, gifted a touchdown when their catchers broke the iron-wall of dwarven defence and we misinterpreted the mechanics of passing and catching. The second half was played with the four-minute per turn rule in effect, which made for a much more urgent, exciting, even tense playing experience. The game flowed - at least, the board game that D and I were playing flowed, the game of Blood Bowl that was being represented on the board was a static battle as the dwarf team ground its way upfield, eventually scoring a touchdown against the four remaining human players able to stand upright. Final score, 1-1, with the humans counting 2 dead, 2 seriously injured, and 4 knocked-out. 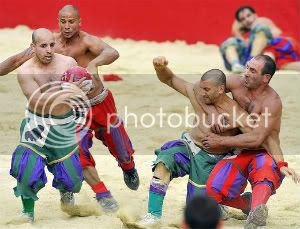 Blood Bowl Live? No, Calcio in Costume. "The modern version allows tactics such as head-butting, punching, elbowing, and choking, but forbids sucker punching and kicks to the head."
Miniatures, miniatures, miniatures. I have never used them when playing RPGs. I am not a great painter, never had the money to collect many, and given that the strength of using miniatures is in creating a vivid visual representation of the scenarios being described, I could not see the point in using a miniature to 'stand in' for some other monster or character. That the game takes place in the imagination is surely the very point of RPGs. Isn't it?
But miniatures, miniatures, miniatures. Before this game of Blood Bowl I had rescued by 1st edition Space Hulk from storage, and had made a start painting up a few genestealers in the classic blue/purple colour scheme. And while I am still not a great painter, I am a hell of a lot wealthier than I was when I was a teenager. So where does that take me? Straight past a fully-painted Blood Bowl team, a star player or two, and towards Warhammer Fantasy Battle, building a dwarf army, and some kind of Chinese hell in which tiny little plastic and lead men beg me to paint them to a standard that I can never achieve, and yet my disappointment only sharpens my appetite for more. And more.
A hell of a lot wealthier than when I was a teenager? Not for much longer.
Posted by Andy Bartlett at Saturday, July 03, 2010 No comments: