When crossing land long lost to civilisation, the PCs hear the ring of steel on steel. If they hesitate for more a moment they will notice the curious lack of cries, shouts, or screams. If the PCs listen carefully, they will begin to hear a pattern in the blows as the same series of strikes, parries, and blocks is repeated. Endlessly.

The sound is that of a ritualised duel that has never ended. Two SKELETON CHAMPIONS in tattered chain fight skilfully but monotonously on a 10’x10’ square ox hide, the boundaries marked by five hazel stakes driven into the ground. To one side is a shield, upon which rests a large iron key. Carved into the shield, in an archaic runic script, is “While Brothers Fight, None Will Prosper”. The PCs should be able to decipher this.

The SKELETONS were twin brothers, cursed by their sister as they fought over the inheritance of the family hall. The hall, a few hundred yards away, has crumbled to a few rotten posts and an overgrown hearth. The PCs will find this with if they search the long grass and bushes (perhaps 1d6 chance per turn). A treasure trove is buried by one of the posts (worth 1500GP, mostly copper and silver coins and jewellery - golden torcs, silver rings and broaches studded with semi-precious stones).

The hazel stakes mark the limit of the curse, forming the points of an invisible pentagram. Within, the Skeletons cannot be Turned and are immune to non-magical attacks. If the stakes are all torn up, the monotony of their fight is broken but the duel will not end. However, the Skeletons will turn as brothers to fight any PC that damages either of them, ending the duel. Other methods might also succeed. If the duel, and hence the curse, is not ended, the spirit of their sister protects the family treasure. She sits on the hearth, a weeping corpse, insensible with sadness.

Posted by Andy Bartlett at Tuesday, September 30, 2014 No comments:

Skeletons are boring. They have no motivation of their own and cannot be reasoned with, so a reaction roll doesn't provide for particularly interesting play. They require no morale checks, so that under-used gem of a D&D procedure is rendered useless. In my games, I have been guilty of encounters with Skeletons that are a bit… programmatic. As the DM, I know how the Skeletons will react, that they will not retreat, and that lacking any creativity they will not do anything inventive.

But it doesn't need to be quite like that. And I want to do this without rewriting the Skeleton entry from Mentzer Basic (or your preferred cross-compatible OSR game). While I have sympathy for the point of view expressed in LotFP and DCC RPG, which suggests that [nearly?] all monsters should be unique and therefore truly 'monstrous', part of allowing the players and PCs to have ‘agency’ is to allow them to make informed, meaningful decisions. Too much novelty, too little stability in the game world undermines the ability of players to make these kind of decisions.

Anyway, in the format of my 1d12 collection of Goblin encounters [part one, part two*], here is the first of 1d6 Skeleton encounters to add a bit of variety to another stock low-level Wandering Monster. Again, this text should fit on two sides of an 6"x4" index card when printed in Calibri 11pt.

The party enter an area of scattered stones. These are not natural features; though worn largely featureless they were clearly once shaped blocks. Several are piled atop each other, the remains of columns long tumbled. Skeletons (6) work with trowels, brushes and small shovels in a shallow pit, collecting pieces of broken pottery and the occasional golden trinket (just 50GP worth in total) in buckets lining the dig site. They are ‘archeologists’, working for the necromancer-sage Angavel Thurm.

A powerful magic user, Thurm is likely unsuitable as a direct opponent for low-level PCs. If the PCs follow the Skeletons they will be led to a mostly-buried astrological observatory. Thurm is using the dead of an ancient city as the ‘manpower’ to further excavate its secrets. On a hostile reaction, Thurm will send Skeletons armed and armoured in ancient bronze (AC: 4, DAM: 1d8-1) to drive the PCs away. On a favourable reaction, the bookish, cobwebbed Thurm will be interested in exchanging information on ruins – near and far. He can supply adventuring information such as the location of ruins, likely traps, ancient guardians, the translation of hieroglyphs etc. He will also buy ancient trinkets and baubles that the party recovers. Thurm might have use for a particularly powerful party when, in the future, he awakens some sleeping evil, or, accidentally-on-purpose, he prompts the PCs into doing so. 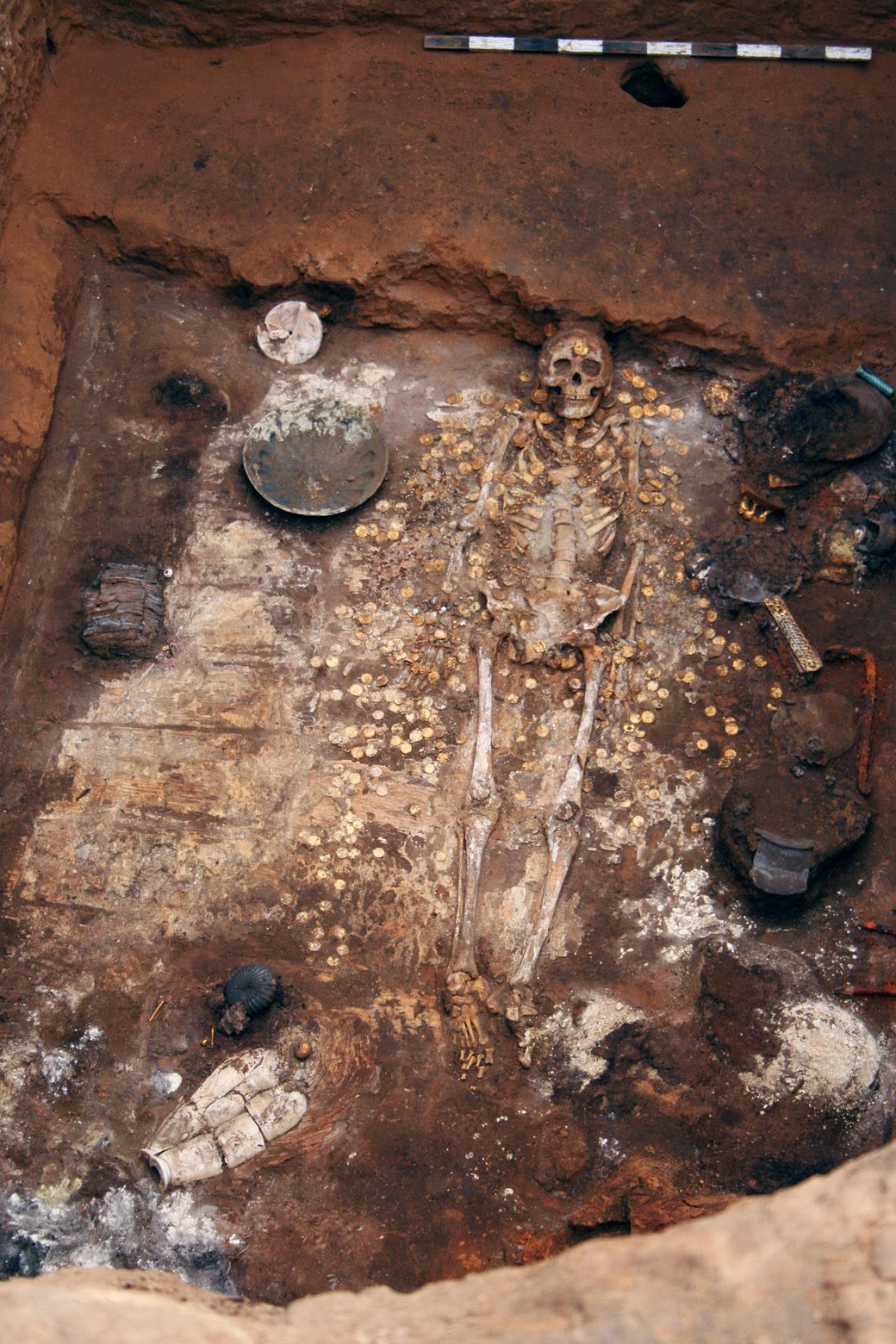 (*I have no idea why everything listed in my Goblin encounters has a Movement Rate of 30' per round. A copy and paste error for sure - I have given it as the Movement Rate of Wolves and Boars as well as Goblins. But which D&D or Clone was I referencing that gives Goblins this Movement Rate? Not Labyrinth Lord or ACKS, which I carry around on my tablet for easy reference...)
Posted by Andy Bartlett at Monday, September 29, 2014 4 comments: