More stuff that everyone and their dog has written about before:

In the last post I said that most NPCs in D&D should not have ability scores. By this, I don't mean that we shouldn't bother writing them down, I mean that they should not have them at all. Ability scores in D&D are not the same as characteristics in RuneQuest (RQ). In RQ, every living thing is statted out just like a PC because in RQ characteristics are a measure of something ‘real’. A Dragon’s STR can be compared directly to that of a PC. In D&D monsters do not have ability scores. If a monster needs only a bare stat line, so does an NPC, though they might have rich, complex histories and personalities.

In most versions of D&D, education does not raise INT, weight training does not raise STR, an improved diet does not raise CON. One of the weaknesses of thinking about D&D ability scores as a measure of something ‘real’ in the game world is that if, for example, we rationalising low CON as being the result of a PC’s obesity, a PCs CON score should be pretty mutable, changing with diet and exercise. If we treat D&D ability scores as representations of a Platonic ideal of the PC, the CON score will remain the same for the entire life of the PC. We might change the PC’s ability score modifiers though...

On the forums at Dragonsfoot I argued that a D&D character with an ability score of 3 was simply at the low end of ‘normal’. The corollary of this is that scores of 18 do not represent superhuman capabilities. Others took a much more stretched view of the 3d6 ability score curve, arguing, for example, that INT 3 represented an intellectual disability and INT 18 genius.

Scores of 3 and 18 turn up on 1 in every 216 rolls of 3d6. If everyone rolls 3d6 in order, that’s at least one genius in every village (and one villager that is superhumanly wise, superhumanly dextrous, etc.). So INT 18 is not the equivalent to Einstein, but to the guy with the [capacity to get a] first class degree in Physics. 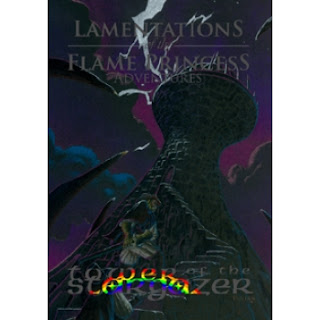 Posted by Andy Bartlett at Thursday, December 13, 2012 No comments:

Who Rolls The Dice?

There have been a few posts about the place recently [here are two: Tenkar's Tavern and Raven Crowking's Nest] that have discussed dice rolling and the temptation to 'fudge'.

Tenkar writes: "By fudging the rolls, you are moving from RPG to Storytelling. [...] That to me is the issue - are you playing a game or a looking for a storytelling experience?" And I pretty much agree with this. As a GM, I have less fun - in retrospect at least - when I have succumbed to the temptation to fudge the dice and ensure that a particular outcome was arrived at. Even if the players do not know it, I have diminished the 'game' when I 'fudge'.

To help me resist the temptation to 'fudge', like many I roll my GM dice in the open. Where possible, I tell the players what I am rolling for and what the different results will mean - so long as to do so would not reveal a 'secret'. But lately, I've been thinking of surrendering the dice. No, I'm not taking up a diceless system. But when a player can be given the full details of the roll without revealing any secrets, why not let the players do all the rolling? Let the players roll the dice for the monsters that are attacking their PCs, for instance. 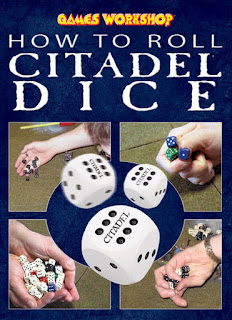 Why? On the most basic level, because people like rolling dice. More, it will defeat much of the remaining temptation to 'fudge'. And last, and most, it will diminish any sense that the GM-player relationship is adversarial - that I, as the GM, am rolling against them. My dice are rolled to administer the world. The players' hands and dice are responsible for adjudicating the outcomes of [almost] all the risks facing their characters.

Well, we will see next time we play.

Posted by Andy Bartlett at Tuesday, December 11, 2012 No comments:

So, back to ‘YOUR Adventure Ends Here’, my project to play each of the Fighting Fantasy books in order, by the rules and rolls, no fingers in pages, no backsies, nothing. Seas of Blood is in dock.

Seas of Blood was one of my favourites, back in the day. And it still is, kind of. Unlike some ‘quest’ orientated gamebooks, in which a map actually merely an illustration of the route upon which your character was taken by the writer/GM, in Seas of Blood there is the illusion (at least) that the map is a sandbox of choices. There YOU are, in the pirate port of Tak, dicing away the evening with rival Abdul the Butcher, when some drunk idiot comes up with the idea of fifty days of robbery to prove which of you is the greatest pirate of the Inland Sea. 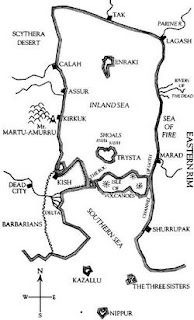 I choose to send my ship, the Banshee, to ‘the Scythera Desert to plunder the rich western caravans’. After camping out for several days in the burning sun, my crew are eventually able to ambush a caravan of LIZARD MEN. The cost in blood was not really worth the treasure; 60 gold pieces and one Lizard Man slave. Nevertheless, the idea that the ‘rich western caravans’ might include (traditionally) evil humanoids is, to my mind, one of the great things about Titan as a fantasy gaming world.

And then the Banshee is sunk. Sailing south, I fail as a captain and neglect several opportunities to flee! from a KISHIAN WARSHIP. We had her outmanned, I swear; a whole point of Crew Strike and three points of Crew Strength. The battle, and her booty, was mine, I gambled. But the dice fell against the odds, my crew fell, and I slipped beneath the waves. Glug. Glug.

Not much of an adventure, but enough to remind me of the illusion of an open world that I have always liked about Seas of Blood. Okay, so it is not as open as Fabled Lands, but in the context of the early(ish) Fighting Fantasy books, Seas of Blood suggested the freedom (as well as the adventure and aesthetics) of fantasy roleplaying games.