The Fellowship of the Grim 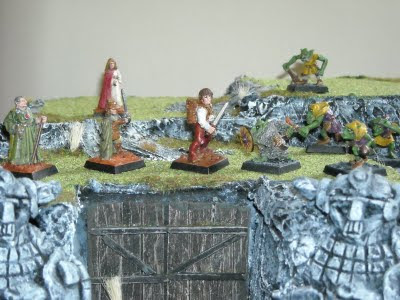 The party assembles.
Well, we've played two sessions of The Enemy Within, with another lined up for tonight. The party are just about to enter the tunnels of Bogenhafen. Don't worry too much about spoilers, none of my players read my blog. If any of you do, exercise care. That, or understand the difference between player knowledge and character knowledge.
From left to right we have: Stanley (an adopted human name) (played by S), a flamboyant, camp Elf, who makes his living reading fortunes in leaves but has a sneeringly patronising attitude to the uncultured Humans, Olaf the Herdsman (played by C), a strapping 20 year old looking for adventure; Susi Narbe (played by D), a small (5'1"), hard woman in her late twenties with a scar on her face; , and Axel (played by A), a big brute of a young man with a serious taste for violence.
Only Stanley is literate (I don't think my players realised how important skills such as that are in WFRP), and Axel is, by some margin, the most competent in combat. Axel has already killed two men in unarmed combat - including Adolfus the bounty hunter, who was punched to stun, but a succession of exploding 6s left him facing a massive critical. Which was lucky for me, as the party were determined to take Adolfus alive. Quite what they would have done with a tight-lipped bounty hunter I'm not so sure. Their NPC friend Josef wouldn't be keen on having a prisoner on his boat, much less for him to be tortured there, and the party needed to get out of Weissbruck after a dramatic fight involving much fumbling of burning oil.
Once upon a time... I'd have been bothered about the difference in scale, with most of that group Ral Partha / early Citadel 25mm scale, with Axel represented by a heroic-scale 28mm Mordheim figure. And I messed up painting his eyes. Now, well, I think I have a much healthier attitude. Again, if anyone can put catalogue / manufacturer / year to these figures, I'd be grateful. I'll be exploring Site of Legends myself - I'm not asking anyone to do my research, just to let me know if they recognise these figures at a glance.
Posted by Andy Bartlett at Tuesday, July 12, 2011 3 comments:

Against the Ogre Horde 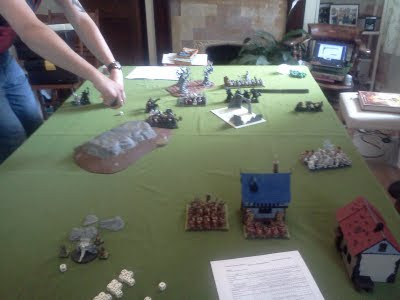 D brought his ‘Imperial Ogre’ army over for a battle recently. And very fine does it look. Several gangs of Golfag’s Ogres, bulked out with a diverse range of Citadel Ogres from before they adopted Central Asian fashions, with support from some wonderfully converted Ogryns serving as Leadbelchers and Halflings taking the place of Gnoblars, this really was a Warhammer Army with a ‘classic’ look. I’m looking forward to seeing them fully painted.

With the game set at 1500 points, we rolled up the ‘ for the Pass’ scenario. And the game was more or less won on turn one, as D’s elite unit decided, unwisely, to turn and face the 30 Longbeard Rangers, led by a Thane bearing the Battle Standard, and with a Rune of Battle on the unit Standard, deployed in ‘horde’ formation. I rarely use Rangers, being a very conservative player – hence, Dwarfs, but after seeing the havoc they cause when they scout in amongst an enemy’s battle line, I think I might play against type. Gyrocopter, Miners and Rangers next time? 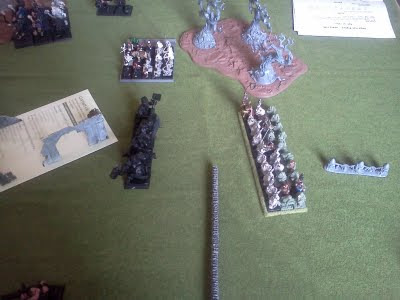 Perhaps I'm not that reckless. After smashing through his elite unit and General, which caused the Halflings to flee in panic (they had stopped for 'second breakfast' in the first round) the Rangers wheeled around, drawing fire from his Leadbelchers but unable to catch them, no matter how fast they pumped their short Dwarven legs. The rest of his army was determined to stay out of the way of the Rangers, who were supported by an advancing block of Slayers. Advancing, his remaining Ogres were whittled down by the Organ Gun and a unit of Thunderers garrisoning a building. My unit of Dwarf Warriors, with hand weapon and shield, that contained my General, sat and waited. 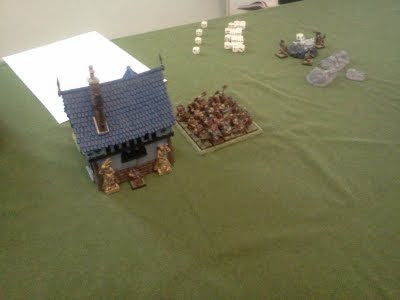 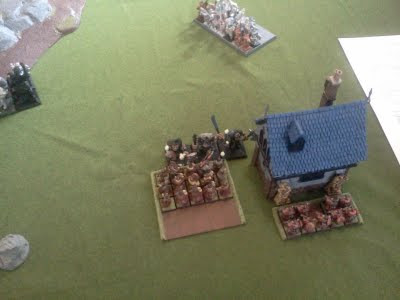