Why do historical fantasy RPGs use modern maps of the past? I love historical maps. Very often they tell us about the way the world looked to the people living in that period; what was known and unknown, what tribal, cultural, political divisions were important, what aspects of their geography shaped their world. So why don't many (any?) historical fantasy RPGs incorporate these sensibilities into their maps?

Now, I love hex maps because they render the map immediately gameable, abstracting geography to units appropriate to the system. But if you aren't 'gamifying' your maps, why not embrace at least an approximation of the way in which the people in the that time period saw distances, proximity, etc. Or go further, and treat these maps (or a modern pastiche) as if it was accurate geography?

Earlier this week I presented this admittedly fantastic map on G+, in the contemporary atlas of history style:

But does a game based on that differ from a game based on one of the oldest maps of the British Isles, from the Rome Ptolemy atlas, presenting the world as seen during the period being 'gamed'?

I know these aren't views of the same period in Britain's history, but you know what I'm getting at...


Well, nothing much to say, except that for about £17 you can get everything yet released... and it's for charity!

Edit: Of course, YOU can choose to be a HERO and pay more than £17!

Having been to see Logan last night, I realised that I couldn't help spoiling the film for myself by thinking about the way in which stories like Logan vindicate my enjoyment of critical wound systems in RPGs - one of the reasons for writing Viscera! (now in v1.02 - a few typos corrected and acknowledgments expanded). It's something that I'd thought about on this blog before - The Rise and Fall of a Hero was a post I wrote nearly two years ago now. So, without any real spoilers, here was Logan - still powerful, still dangerous, but hindered by age, disease, and the accumulation of countless wounds. Logan even uses a special serum to temporarily undo the effects of these wounds, something for which I've suggested some rules in Viscera!

So, just as when I watched The Revenant, and imagined it as a LotFP adventure in which the main PC just keeps making his Saving Throws, I managed to enthusiastically undo some of magic of the silver screen by thinking about dice.

Anyway, Logan is a very good film. Indeed, it's shame that it has taken until now for Fox to get the best out of its Marvel licence - as the Legion tv show is proving to be even better. If only someone hadn't coloured the experience for me by describing it as [SPOILER?] a gory 'Little Miss Sunshine', with mutants! [SPOILER ENDS]

Oh, and there is no way that Logan should be a 15 certificate. The violence is very bloody and very frequent.

For a long while I've been mooting the idea of an Advanced Fighting Fantasy fanzine. I've chatted to people, got some agreements in principle, but never made much progress. So I thought I'd knock up an 'issue #0' largely by myself, just to get something out there. And, after a spell in which I put the project aside for several weeks, I've finally finished the thing. Well, 'finished' the thing - if there are typos, or egregious balance problems that you uncover when these ideas are not being applied at my own, idiosyncratic table, let me know, and I'll update it to v1.1.

So, here is Viscera! a collection of rules, tables, and guidelines for adding a bit more blood, gore, and grit to your Advanced Fighting Fantasy games.

For a while now I've looked for fantasy coins that I can use in my games. In games such as WFRP, where those pennies matter, I figured it'd be a bit easier if the players could just hand over the coins, rather than fiddle around rubbing out numbers on their character sheet. For a long time, I couldn't find any that were cheap enough. 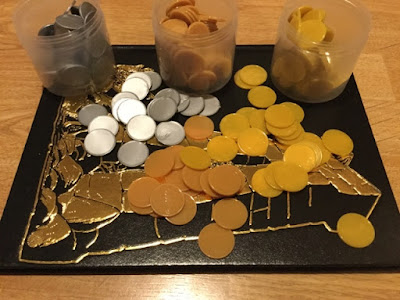 I got these from the 'SuntekStore'. No, this is not an advertorial, but it wouldn't be much use as a post if I didn't actually tell you where I'd got these from. In truth, they're not much use for D&D, in which characters are regularly carrying around more than 100 coins - these come in packs of 100 - but for games such as WFRP, or Advanced Fighting Fantasy, or for many other flavours of fantasy in which fortunes aren't measured in tens of thousands of pieces of gold, these will be very useful.