Billy (Goes to Mordor) has written recently about a fun, but unsatisfying, play through of Shadows Over Bogenhafen. I commented, saying that our group's experience - when I ran the adventure - was similar; the players were 'pushed' through the investigation, which allowed them to arrive at the climactic event (and foil the bad guys) without really understanding what was going on. This experience of playing Shadows Over Bogenhafen doesn't seem to be that unusual.

I recently dug out my Call of Cthulhu stuff, for some light bedtime reading (with some distant idea that I might run Masks of Nyarlothotep) and that started me thinking; would I have run Shadows Over Bogenhafen 'better' if I had more experience of being a Keeper? What are the differences between Game Masters who have learned their trade as 'Dungeon Masters' (or equivalent) and those who learned their trade as Keepers? What experiences do people have of DMs running Call of Cthulhu, or Keepers running D&D?

Adventures Among The Colonials

Fighting Fantasy #18, Rebel Planet: YOU are humanity’s last hope, a super-spy from SAROS, on a mission to destroy the alien supercomputer that controls the inhuman Arcadian Empire. All you need a string of binary numbers, which presumably are converted into page references in a manner reminiscent of the careless keymaster of Firetop Mountain. Trouble is, you need to get the numbers from the rebel leaders on various human colonies under Arcadian rule, and you don’t know very much about them. So the plan is this; you fly to each planet and have a day or so to make contact with the rebel movement and get hold of the binary McGuffin. 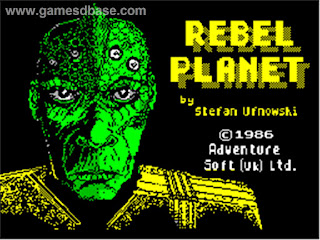 Might have to get myself a Spectrum emulator... (image from www.gamesdbase.com)

Luckily, you are trained in unarmed combat, which will kill or incapacitate an opponent on a roll of 6 after winning an Attack Round. Unluckily, the first fight I get in is with an Arcadian POLICE CHIEF who doles out an extra 2 STAMINA points of damage on a roll of 5-6 regardless of whether or not he wins the Attack Round. And I’m drunk to boot.

But it isn’t lack of STAMINA that ends my adventure, just a poor choice. While losing 2 LUCK points (because I asked a taxi to drive into a futuristic congestion zone and was ‘hard hearted’) and 2 STAMINA points (as I was tired and hungry) before getting ten sections in was a bad omen, I did manage to get one of the binary numbers thanks to an acute sensitivity to the kind of acrostic poems favoured by the militaristic Northern Arcadians.

My downfall is related to my crude approach to computer hacking. While others crack the security codes, I crack open the head of the Southern ARCADIAN SECRETARY sat at the computer, hacking him apart with my laser sword. I stop to read the files, searching for hints as to the location of the rebel leader, only to find that I am too engrossed in browsing to hear the approaching guards. Yep, that sounds like me. My adventure ended in the office of a university administrator. Yep, that sounds a little familiar too!

Postscript: I get the feeling that Robin Waterfield’s description of the colony planet of Tropos (settled 2070 – I might just get to see that if I live to nearly 100) mirrors some 1970s/1980s views of ‘the colonies’. Tropos is a backward place, its economy built on mineral wealth that attracts immigrants from the mother planet with the notion that it is ‘more terrestrial than the terrestrials’. Quite which former colony the obese inhabitant of Radix, whose lives of luxury rely on labour-saving devices, are a meant to represent to the imagination of 1980s Britain is anyone’s guess…