Fighting Fantasy in the Guardian

Well, I couldn't miss it, could I? The old Fighting Fantasy logo on the front page of the Guardian Online. Interestingly, the argument of the article - that the fusion of game and story in Fighting Fantasy has fundamentally changed our view of games - is undermined by Livingstone's 'desert island' game: chess. Of course, if Livingstone did spend eternity with only chess to play he may well end up house-ruling chess to replace the abstract playing peices with NPC mono-motivated pawns and PC knights with their own interest in L-shaped moves.

YOU are a buffoon!

The Rings of Kether. Ugh. YOU play a space cop trying to bust some drug smugglers (brave for a kids book). Unfortunately, the space cop YOU play is also a buffoon.  My space cop landed at the space port and checked out the local underworld bar. Seeing a table where a bunch of known criminals were gambling, I decided that the space cop should join the game and see what he could learn. What does the buffoon do? He finds out that the horrible looking, criminally connected woman, Zera Gross, runs an import/export agency, and says, "More exporting than importing, I'd wager, the nature of the drug business being what it is! Ha, ha!'. I’m not kidding. Space cop gets beaten up, loses 2 STAMINA points, permanently. By the time my space cop gets his brains blown out on the roof of a warehouse (about 10 sections later) I couldn't really care what happened to this idiot. Is he really is a elite space cop, an agent of the Galactic Federation, a Grade 1 Investigator, or in some later twist does it turn out that YOU are playing a 'jimp'? 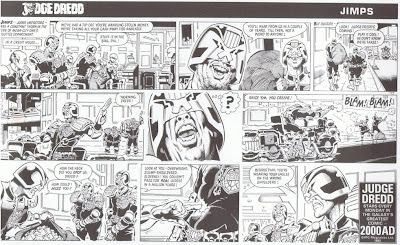 Anyhow, The Rings of Kether reminded me of the need for the fantastical in my fantasy gaming. Only the faintest of colours on the edges distinguished this book from one set in the 20th century. No science fictional or space fantastical elements had any major role in either driving plot or generating atmosphere. I could tolerate that, if it was a hard-boiled detective game with mere sci-fi dressing, but YOU are definitely not Philip Marlowe in space.