I'd just like to direct you all to John B's post on what he means by the term Adventure Games, which captures a lot of what keeps drawing me back to classic D&D/OSR based games *even though* I'm not the greatest fan of some aspects of the mechanics. The procedures built into the game create a certain rhythm from which a story of adventure emerges *after the fact*. Of course, there is no reason why you can't 'proceduralise' other games which concentrate most of their mechanical energy not on 'the adventure' but on the regulating PC actions - as John B has done with Mythras. Anyway, here's a passage I particularly liked:

"The "adventure" then is not the narrative the player-characters flow through towards an inevitable climax and resolution, but the procession of problems, challenges, etc. they face; the decisions and deliberations they make about what to do about each problem or challenge; and the procedures they enact as part of those decisions, and the consequences of all the above interacting with one another." 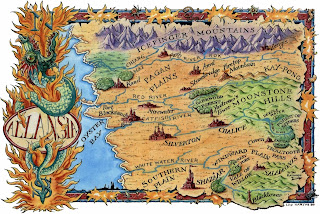 [Addendum: Click on the Advanced Fighting Fantasy 'label' to see actual play reports from previous games as well as my thoughts on how to best GM games using the system, and other miscellanea.]
Posted by Andy Bartlett at Monday, March 25, 2019 5 comments:

How To Resolve Everything That Comes Up

The older I get, the less tolerance I have for crunch, even if I do sometimes have flashbacks to teenage fantasies of having a table at which a game in which weapon length, height, weight, incremental fatigue, etc. were all incorporated into a smooth running game. I want quick systems that arbitrate the move from player choice to consequences - which for me is the crux of the gaminess of role-playing games.

Anyway, I recently came across a post (from last November) on The Borderlands entitled How To Resolve Everything That Comes Up, and basically, "yes". In fact, I've said it before, I think, somewhere, in different words, that the 2d6 Reaction Roll system is THE lost universal D&D arbitration system. I wasn't the first, of course.

So: the players have made a choice and it is not clear what the outcome must be? Let the dice decide. Decide what would be the worst possible outcome, the best possible outcome, roll 2d6, add or subtract 1, 2 or in extreme circumstances 3 for all the factors reckoning into the disposition of the situation, do the same for PC actions (default to Ability Score modifiers) and interpret the result.

One of the great joys of returning to Classic D&D and its variants a few years ago was using tools such as the reaction roll, random encounter tables, and morale rules and feeling much more like I was also playing the game, not simply running a game for other people. Creative interpretation of the results of simple dice rolls is one of the key skills, and prime pleasures, of Old School games mastering.

Oh. I've kind of spoiled Steve's post. Head there anyway, he has it laid out in a well presented table!
Posted by Andy Bartlett at Monday, March 04, 2019 4 comments: