Finally, here's a fifth skeleton encounter that fits on two sides of an index card, to follow the previous:

As the PCs travel by ship they or their crew notice that a shadow under the surface of the water, is tracking them. The crew speculate that this is a whale, or a giant shark, or some chimeric sea monster. Those observing closely will see that the surface of the water is broken by roiling bubbles. At least one old sea dog will surely know the following legend... they did hire an experienced crew, didn’t they?

The PCs’ ship is being pursued by a sunken ship crewed by the undead. The ship was once the Basilisk, captained by the notorious pirate Spittlebeard. Notoriety can be a dangerous thing, and the city states of the coast commissioned a fleet to hunt the pirate. The Basilisk was driven into a deep inlet. The fleet set her ablaze, their catapults launching jars of flaming oil. The legend goes that not a single pirate attempted to escape the flames. The Basilisk with her crew, and all her treasure. This encounter can be used to provide a hook for an underwater adventure to recover the lost treasure of Spittlebeard, but none is carried on the wreck of the Basilisk.

The PCs can attempt to flee the shadow under the water (see Expert p44). Treat the Basilisk as a LONGSHIP. If the PCs fail to escape, the Basilisk will surface – within grappling range – in a great burst of steam. 50 SKELETONS swing and climb across, and, when close enough, leap over the gunwales with daggers held in bony jaws. The Basilisk itself is but a skeleton of a ship, merely charred ribs, keel, stern and bow (with Basilisk figurehead). The ship, and the SKELETONS, are wreathed in barely visible hell-flame.

These Skeletons are possessed by the lingering personality of SPITTLEBEARD, who has made a pact with a Great Evil in order to continue an unlife of plunder. Dressed in tattered finery, he can speak and reason, but is quite mad, having just two desires, to collect gold, silver and gems, and to kill while doing so. PCs may be able to exploit either of these desires, and SPITTLEBEARD will flee (MR: 9) if the battle looks like it will fulfil neither desire. SPITTLEBEARD carries a map to his underwater lair – presumably a place of interest to a Great Evil – and fights with a CUTLASS +2.

Posted by Andy Bartlett at Thursday, November 13, 2014 No comments:

One of the ways to judge what kind of modifier should be applied to a Skill Test in AFF2e is to consider John of Salamonis, an ordinary human with some expertise in the task at hand (effective SKILL 7), and ask how difficult should this task be for him. As described in my last post, he has roughly a 60% of success at an unmodified Skill Test, which accords with the kind of score I usually give to a competent (but not ‘expert’) practitioner in a BRP/d100 game. Which is nice.

But let’s lay it all out in a table:

* In my own games, effective Skill for any task, including combat, is capped at 12. Achieving SKILL + Special Skill scores of greater than 12 allows Adventurers to have better chances of dealing with the kind of heroic level obstacles that impose large negative modifiers.

Well, except for the jump from 60% to 40%, and that is fine as in my interpretation it represents the difference between an ordinary task being performed under ‘adventuring stress’ with one that has some distinct difficulties. Note that the 100s and 0s in that line represent circumstances in which John of Salamonis will only fail on a fumble (double 1s), or succeed on a critical (double 6s). Again, the actual chances are pretty close to BRP/d100s 5% fumble/critical range. Which is nice.

So when determining modifiers, rather than looking up tables mid play, I try to simply ask, ‘HWWJD?’ How Well Would John Do? If we think our competent everyman would have a 20% chance of success, we should apply a -3 modifier to the task. If we think he would succeed on anything but a fumble (double 1s), we need to give the task a +4 modifier, at least, if we bother rolling at all. And so on. These are applied to the effective SKILL of the Adventurers, which might well be greater (and sometimes, less) than 7.

(I promise to stop. Well, maybe. Most of these kind of posts are - quite obviously - me talking to myself, laying out the kind of material that I then turn into bullet points, mantras, tables etc. that end up stuck to my 'Referee Screen'. Or the bundle of notes I am using, whatever. It is intended to help me run a game more smoothly and to act as a check against me slipping into the kind of illusionism that negates player choice.)

Posted by Andy Bartlett at Thursday, November 13, 2014 No comments:

In which I talk about the way in which I handle Skill Rolls in AFF2e, especially the ‘problem’ of what to do with low SKILL characters who are meant to be experts in a particular Special Skill. In short, don’t roll, and if you do roll, roll high unopposed. 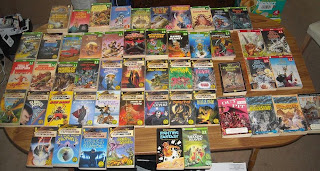 3. Roll the dice. The dice should be rolled when the situation is unusual or perilous, or when an Adventurer is attempting a task beyond their competency. In these situations there will be no difference between the chances of success enjoyed by the two adventurers described above. The Adventurer with SKILL 8 is able to make up for his lack of professional expertise in such a situation by his or her sheer grit, natural talent, ability to work under pressure, and/or downright heroism. The Adventurer with Special Skill 4 can make up for his lack of natural talent with his professional training. So, in such situations, does the Adventurer succeed or fail?

4. Does the roll beat 14?  All non-combat tasks should be resolved by rolling 2d6, adding SKILL and Special Skill, adding or subtracting any modifiers, and attempting to equal or beat 14{*}. This means that a character – let’s call him John of Salamonis – with an effective SKILL of 7 (an average human – SKILL 5/6 – with some training Special Skill 1/2) succeeds just a bit less than 60% of the time.

A Legendary Feat [-8]
As an example, this is the modifier to an Awareness test if a sneaking character is invisible. This would reduce the effective SKILL of John of Salamonis, and most people and creatures of Titan, to 0. This means that, if the Referee rules the action possible at all, the chance of success is just under 3%. An Adventurer would need an unmodified effective Skill of 11 before this chance is improved (to 8%).

Almost Impossible [-6]
As an example, this is the modifier applied when fighting in darkness. This would reduce the effective SKILL of John of Salamonis to 1. Again, this means that the chances of success (vs. a target number of 14) is just 3%. However, expertise and talent tells more quickly, with Adventurers with an unmodified effective SKILL of 9 having an 8% chance, rising to nearly 17% at 10, and nearly 30% at 11.

Extremely Difficult [-4]
As an example, this is the modifier applied to Swim or Dodge tests when encumbered by a very heavy weight. This would reduce the effective SKILL of John of Salamonis to 3, which means that he has an 8% chance of success.

Difficult [-2]
As an example, this is the modifier applied with fighting while drunk. This would reduce the effective SKILL of John of Salamonis to 5, which means that he has a 30% chance of success. He will fail more often than not, but will succeeding often enough.

…er, but hang on. What about positive modifiers? What happens when things are easier than normal? In most cases, I argue that this should mean that Referee simply rules that the Adventurers succeed. Even the chances of our everyman, John of Salamonis, shoot up to over 70% with a +2 modifier, over 90% with a +4 modifier, and 97% with a +6 modifier (assuming double 1 is an automatic failure). The exception is, of course, effective SKILL in combat, in which positive modifiers do play a part (though I propose capping effective SKILL for human/mortal scale Adventurers at 12). In this case, the roll is not to beat a target number of 14, but the Attack Strength of the opponent, which can be much higher. The modifiers for combat are well detailed on p59 of AFF2e.

But note. Combat is the only place for ‘opposed rolls’ when I run AFF2e. When Adventurers are engaged in a contest vs the environment the roll is unopposed. Equal or beat 14, with modifiers for difficulty. In all non-combat contests vs NPCs, Adventurers likewise roll to beat 14, with modifiers for difficulty. I do not construct NPCs symmetrically to Adventurers. They have SKILL and STAMINA scores for combat, but their non-combat expertise is handled by key words and associated modifiers, which apply to the effective SKILL of the Adventurers, not the NPC. So, if an NPC description has that the NPC is keen eyed, I will also write that all Sneaking tests conducted against that NPC are at -2, for example. I don’t have to give him Awareness 6 to make up for a feeble SKILL score. Or the other way round – If Adventurers and NPCs are not symmetrically constructed I don’t need to worry about the effect of giving an NPC a high SKILL score – this only represents combat effectiveness, as per the original gamebooks.

It really does make statting up NPCs a piece of cake.


{*} The AFF2e rulebook has a suggested target number of 15, which means that there is a big difference between the default ‘roll low’ system and the alternative ‘roll high’ system. With a target number of 15 for the ‘roll high’ system, a character with effective SKILL 7 would succeed just over 40% of the time. In the default system, a character with an effective SKILL of 7 would succeed in rolling 7 or under 60% of the time.