Life Among the Ruins

As a result of my boundless vanity, I occasionally check out from where the few hits of my blog come from. This doesn't take too long. The other day I noticed a few hits coming from a really interesting post by Joseph Manola titled "OSR aesthetics of ruin". It is a few years old, but I really recommend that you read it. I was busy cutting quotes from it to post here, but found that what I would have ended up doing was repeating almost all of it back to you. So read it!

So what I will add is that the comments Jean-Francois Lebreton recommends the paintings of life in the ruins of Rome by Hubert Robert and... wow! This stuff amazing - ripe for providing the visuals of a great FRPG setting. And, from this pointer, I found that there is a whole style of painting called Capriccio -  "architectural fantasy, placing together buildings, archaeological ruins and other architectural elements in fictional and often fantastical combinations". I could see an entire OSR-game (or other game in which exploration was a key game 'mode') built around Capriccio. 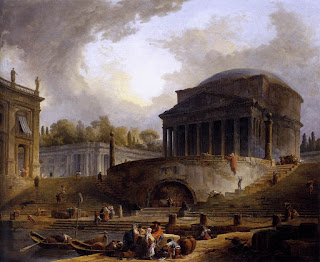 View of the Port of Rippeta in Rome - Hubert Robert 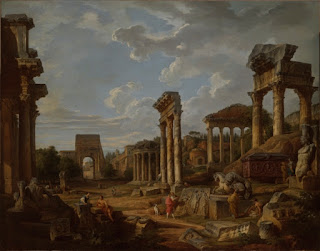 A Capriccio of the Roman Forum - Giovanni Paolo Panini 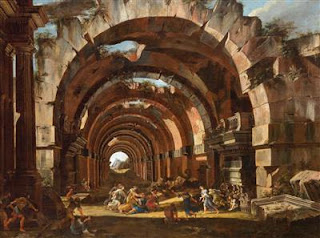 Arches in ruins and Hecuba’s vengeance over Polymestor - Viviano Codazzi

I'm a tremendous fan of the world of Legend - the setting for both the Dragon Warriors RPG (seriously, grab the pdf of the core rules - it is PWYW, so get it free, read the setting material, and then come back and pay for it - or buy the PoD) and the Blood Sword gamebooks. So I was pleased to see that Dave Morris is Kickstarting a new edition of book five of the Blood Sword series 'The Walls of Spyte'. As Dave says on his blog:

"The Kickstarter is for a limited edition full-colour hardcover. That's going to be a genuine collector's edition, as it will only be available to backers of the Kickstarter. The paperback will go on sale as soon as all the hardcover copies have gone out to backers. So if you just want a paperback copy of The Walls of Spyte, you don't need to back the Kickstarter, you just need to wait a few months."

Importantly, it *is* a new, improved edition of the book; Dave Morris describes his dissatisfaction with the original version here. Now, I'm not one for hardback gamebooks - though this is very tempting, and I would love to see this project hit its stretch goal of £6000 which is an omnibus edition of the Blood Sword gamebooks using something more akin to the system in the Fabled Lands books.
Posted by Andy Bartlett at Friday, February 15, 2019 1 comment:

Did our bedtime stories game go well? Well, the girls (7 and 9) seemed to enjoy it? R played May, daughter of the Witch Queen (R later said that May rarely used her full name; May Corpse-Death), and J played Pearl, warrior princess of the Crystal Castle.

I plumped for Fate Accelerated as the system as, despite being unfamiliar with *actually running* Fate, I figured that it would be the one of the best way to create characters for people who are not going to get to grips with the mechanical bits and bobs of chargen, or the constraints involved into fitting a character concept into the boxes of archetypes, classes, or even good old fashioned skill lists. Asking a kid questions such as "Who are you?" "Why do you get into trouble?" and "Tell me one more important thing about your character", to generate Aspects, followed by, "How does your character solve problems?" to assign scores to Approaches is about as total newbie friendly as it can get.

One thing that both of them instinctively got was Compels - in fact, they were always looking for ways in which their Aspects could complicate their plans (and so get them another Fate point to pile in front of themselves). This, of course, is just an extension and formalisation of their usual make-believe (role) play; without the background in rules-based games in which the goal is to mitigate weaknesses and maximise chances of success, 'making the game more fun' by suggesting that the Witch Queen might show up, or that the fact that Pearl is hot-headed and always getting into fights simply seemed obvious.

They also seemed far more open to approaches to problem-solving / encounter resolution that perhaps wouldn't occur to more experienced gamers. For example, they met Sir Percival at the ford across the Rainbow River, who challenged Pearl to a contest of arms. Pearl managed to get a "success with style", which we worked out as granting the Boost "knocked back into the shallows". Rather than follow this up with another physical attack, J decided that Pearl would brow-beat Percival with a "don't you know who my mother is" speech and invoked the Boost which took Sir Percival out of the fight.

I played a bit fast and loose with the rules - in part because I didn't really know what I was doing and in part because I was running a 'bedtime story'. One thing that I'll have to reconcile if I'm running Fate for adults is my 'old school' instinct to run a non-combat/non-physical peril encounter without calling for the dice, and to make use of what a game like Fate offers and play out these scenes making use of the Aspects, Fate Points etc. An example of this was when May bumped into her mother, the Witch Queen, in the Bone Orchard, and ended up in a very teenage "you're not the boss of me!" argument. R came up with some great "attacks", and it seemed entirely appropriate to run this is a "combat", especially as to not do so would be to privilege physical combat as *the* game. It's even more clear to me now that Fate (and a few other games with some 'familial resemblance') would be great for running games in which there is nothing recognisable as combat or even peril in traditional RPG terms.

But it was FUN. My wife told me later that she'd be listening from the other room and had been really impressed with how engaged and excited the girls had been. We'll definitely be playing again - there is  Dragon to meet, after all.
Posted by Andy Bartlett at Monday, February 04, 2019 2 comments:

Rugby has been cancelled - frozen pitch (don't think any games in the Yorkshire leagues were on today), so I've had a fair few 'extra' hours today. So I promised to run Fate Accelerated as a bedtime story for the girls. This is as far as my prep has got - hoping to get an Adventure Time, MLP, Steven Universe type atmosphere from the game. 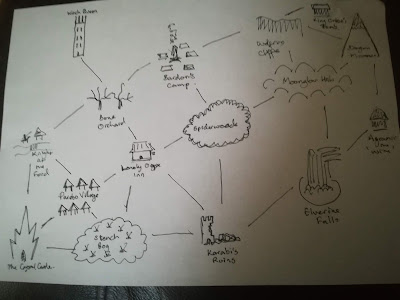 Posted by Andy Bartlett at Saturday, February 02, 2019 No comments: