A critical hit with the ugly stick

In Magic World, a BRP game, characters have an Appearance (APP) characteristic. As with any characteristic, if, by magic, ageing, disease, or wounds, the characteristic is reduced to zero, death follows shortly. But just how does a character 'ugly away'? 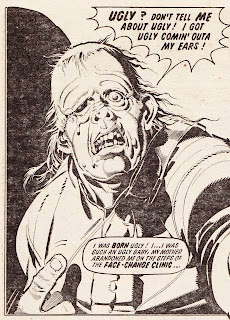 This is a pressing question. In the our new campaign, a Magic World game set in Allansia, the players have rolled a particularly ugly bunch of PCs. Forget the good, the bad, and the ugly, we have the ugly, the ugly, and the ugly. As these players are particularly reckless, I can envisage (en-visage, geddit?!) an early-campaign Major Wound stripping them of 1d3 points of APP, leaving them hovering at the door of death by disfigurement. But what does this mean?

Well, it means that the player characters perhaps ought to head to the Salamonis School of Decorum and Ettiquette for some APP training. And it means I should have used Elric! characteristic generation, which I remember as being 2d6+6 right down the line. But in terms of being reduced to zero APP, I see two options.

Option one is to interpret a Major Wound that reduces APP to zero as a catastrophic fatal wound (sword through face kind of thing) regardless of remaining HP. "Yes, I know your character still has just under half his HP remaining, but that sword stroke chopped his face clean off. Sorry."

Option two is the Call of Cthulhu solution. Having APP reduced to zero causes permanent destruction of the character's personality, and control of the character passes into the hands of the Referee. The character is 'dead' as a player character. Incidentally, it is not the ugliness itself that causes this, but the damage to the character's sense of self.

Are there any other ways of explaining character 'death' through APP loss? Have you ever had a character 'die' through ugliness in your game?