Is a good thing.

Seriously.  I can’t imagine the point of playing a game that involved nominally lethal conflict in which there was an expectation that the player characters would not run a serious risk of death. Sure, certain campaign concepts might reduce the risk somewhat – the players might play the champions of the gods, for example, able to wade through normal men as if they were mere distractions. But if a player character goes up against a non-player character or monster of roughly equal power, the PC need be better equipped, or have chosen the ground, or engage in clever play, else his odds of winning that fight will be roughly fifty-fifty.

“3x was the first time I saw players planning out their advancement 5, 10, even 15 levels in advance. It wasn't something I could comprehend, as just surviving to the next level was carrot enough for me. Was it the more complicated characters that 3x embodies that led to people assuming their characters were nigh immortal? Was the risk of character death significantly lowered starting with 3x? Was it the advent of computers assisting player record keeping that led to programs that allowed such planning to take place?”

And some of the blame has to go to computer games, including, but not limited to, CRPGs (and CRPGs are NOT roleplaying games). A key piece of strategy advice for any CRPG is ‘save early, save often’. This is the style of play that the designers assume will be employed. Sure, you could play ‘ironman’, and start from the beginning each time your character died, but even in a ‘sandbox’ such as Skyrim you’ll be seeing the same thing over and over again. In a real RPG, the experience of playing a new character can be genuinely novel, not simply a sullen retread through the levels until you got back to where you were before.  I quickly got bored of Skyrim – as I get bored of most CRPGs, after an initial surge of enthusiasm. There is simply no risk, or even an illusion of risk. When my Skyrim character enters the dungeon, my worry is not that he’ll die, it’s that he’ll ‘die’ and I’ll have to play through a section of the dungeon again. 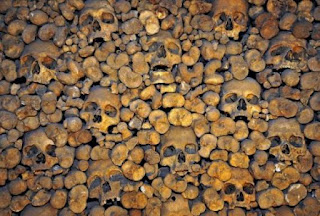 I wrote this post last week, but it is particularly appropriate now as tonight’s game ended in a TPK. I'm not a killer DM, I promise. More on that later.