The Builders of Byzantia

As we reconvene the gaming group after Christmas, we decided to continue the campaign by having the party return from the mountains empty handed - driven down by bad weather, perhaps. The Beastmasters of Byzantia were disappointed; it is a very competitive calling, with each man judged on the quality and exoticism of his menagerie. But there would be no Hippogriff eggs hatching in their halls this coming spring. Maybe next autumn the party can launch another expedition in search of Hippogriff eggs. The party overwinter in Gateways, brooding on their failure and drinking away the eyes of D'namnas.

The below is what I wrote for the players, presenting some options for adventure.

Your winter passes in a fug of drink and smoke and salted meat. The weather never turns cold enough to freeze the lake, and while the groans of the undead are unnerving, there was, thankfully, no danger of the shambling remnants of the Second Empire of Humanity crossing from the ruins of the Castle of Gaskell the Black to Gateways. Nevertheless, the snow and cold slows life in Gateways down to a crawl... people huddle at home, little news or novelty enter the town. The party enjoys the Festival of Lights during Frostbite, and watch with grim faces as the Baron and the assembled vicars of the churches symbolically bury the world at the end of Earthdeath. They then spend a full week indoors during the storms (and worse) of the Howls of Chaos, when the Intelligences Beyond realise that they have been tricked and the world yet lives.

When the new year begins with the month of Ashunmoon (named after an ancient Alysian shepherd 'saint'), you are keen to leave town. The religious practice Abstention - from anything and everything pleasurable - between the 7th and the 14th, so as to not enrage any malign entities disappointed that the world did not die. There are enough who are devout in town to make this practice all but compulsory.

The first news that comes into Gateways is bad. Goblins, it is reported, have been putting homesteads and farms to the torch. While drinking away the winter, the party made friends with Stephan, a member of a horsetrading clan, he asks that you help his family transport a herd of (very rare) white horses to the Elven market at Rivalyn. Acting as the agent for his brother Pyotr, the head of the clan, he offers 400SP for the party (who have a reasonable reputation now, even if just for the amount of treasure they have squandered) to act as insurance against Goblin horse thieves.

The ruins of Gaskell's Castle are quieter, the [un]dead presumably returning to their restless sleep, but still sits across the water, a black, brooding ruin.

You also hear of agents for the Gnome King of Underhill, who is seeking men and women of repute to protect the the trade caravan containing a winter's worth of industry as it works its way south to Mirror Bay. Mirror Bay is the seat of the Duke and the only 'city' in the Duchy and, therefore, doorway to the rest of the Known World.

The party chose the investigate the ruins of Gaskell's Castle. I decided to place the pyramid of B4 The Lost City in the middle of the ruins of a castle modelled on a Roman fort - the Second Empire of Humanity had a distinctly Roman styling. The style of the pyramid, however, suggests a remnant of an older civilization. I changed much of the details, while keeping the maps and the distribution of encounters (if not the encounters themselves). Major changes had to be made to the different factions in the dungeon; mine are the Builders, the Judges, and the Maidens. The first faction the party met in their delve were the Builder of Byzantia:

The Builders of Byzantia are a human, all-male semi-secret society; almost everyone knows that they exist, but details of their membership, rituals, and purpose are not known with any certainty. Common understanding of the organization runs from the mundane to the fantastical. Many see it as a guild-like network of elite men, some extend this idea and see the Builders as the shadow government of Byzantia, even a cult dedicated to restoring the glories of the First Empire of Humanity[1]. Some will say in public that the Builders are global conspiracy in the service of powerful supernatural patrons. A Demon of Law, they suggest, given the Builders’ emphasis on the virtues of order and planning. There are, though, whispers that the Builders are a hidden cult of Chaos, searching for the secrets of Escherean architecture.

Sample Titles: Grand Planner, Architects, Surveyors, Builders
Alignment: Law
Values: Civilization, Order, Planning, Labour
Patron (publicly, anyway): Saints Constant and Stankov – the founder of Byzantia and a (mythic?) heroic builder. They represent the duality of human achievement and the taming of the world.
Symbol: A pyramid, over which rests a hinged ruler. At the middle of the pyramid is an eye. 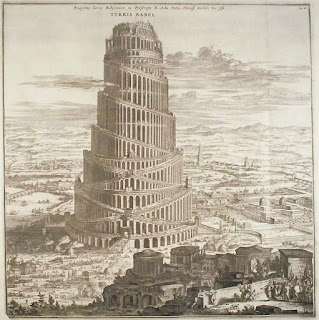 The Builders encountered in the ruins of the Castle of Gaskell the Black wear heavy leather aprons marked with the symbol of the Builders. They carry a variety of tools and measuring equipment, and tend to favour warhammers as weapons. Most are NM, others are Level 1 Specialists. Their Leader is Isoclesus, who is a Level 3 Specialist. Classed Builders tend to have skill points in Architecture and Tinkering. Of course, NM Builders will also be proficient in their trade skills (but will be less competent in other aspects of adventuring).

Goal: The Builders in the ruins are looking for technology that pre-dates the Second Empire. So far, they have found a few (inoperable) bits and pieces, and a keen to recover whatever may lie unfound in the depths.

Demeanour: The Builders are friendly towards parties that are friendly towards mostly human (and male) parties, though some heterodox Builders see Dwarfs as admirable fellow men. In general, they see adventurers as the first, crude wave of civilizers; they clear the wilderness of monsters and barbaric humanoids. They are sexists, and disparage the Maidens of Symmetry in vulgar terms. Valuing function over form, they regard the Maidens as the embodiment of their views on women; decorative rather than productive. They fear and despise the Judges, whose adherence to laws as well as Law, and the bloody purges they are wont to engage in, makes them an enemy of progress and human achievement.

Isoclesus is a plump man, generous with his hospitality – such that is possible in ruins. He is fascinated by ants (and other social insects); by their ordered society and prowess as builders. He keeps a glass ant farm in his quarters, and has brought several rare books on entymology with him to the ruins. The distillation of ant scent that keeps the Builders safe from the vicious Black Ants that infest the upper reaches of the ruins is a result of his own research. The Builders ability to move safely among the Black Ants protects them from the other factions.

The party (4 players, 8 PCs of Level 1 and 2) ended the first session deep in the pyramid, having just defeated a handful of Skeletons. That was the only combat encounter in two-plus hours of play, such was the caution of the players, and their intention to find ways down without delay[2]. I also think that they might think that I am a 'dick' DM; at one point I had to say, "If there was writing on the door I would tell you outright, you don't need to keep asking. I'm not going to say, 'Aha, the door said 'trap' and now you're all dead. Ha ha!' Trust me, I will tell you of anything significant unless it is actually hidden." I'll write a play report once they have completed their delve - with a game due tonight (possibly), before I run a different group through  my version of U1 The Sinister Secret of Saltmarsh using DCC RPG tomorrow! And I plan to submit a revised version of an academic paper this week too - busy times!

[1] The First Empire of Humanity fought a war against the Gods and won, driving them into the Heavens. This victory was won at great cost. The war tore through the fabric of reality and allowed the Intelligences Beyond (of Law and Chaos) into the world, and Humanity fell into a long dark age as the other races of mankind came into being.

[2] For all their tactical caution (opening doors, investigating tombs, etc. - to the extent that the lead PC was roped to the rest of the party, to be hauled clear of any pit traps, falling blocks etc. [I'd give a bonus to the appropriate Saving Throw, I guess]), strategically this party can be very reckless, in previous sessions plunging deeper into a dungeon when there are the sounds of angry humanoids behind them (ending in a TPK), and following an evil Mire Sprite (a Mixie) as it beckoned them down a narrow path (which nearly ended in a TPK), for example. So, trying to not be a dick DM, I think I might have to warn them (remind them) that, generally, the deeper you go, the more dangerous things get, and then let the party live or die by their own decisions.