Back at the Brushes

I thought it past time that I dug the paints out again. Child #2 is now one year old, and as the prospect of being involuntarily transformed into one of Cameron's 'skivers' looms, I thought it best to engage myself productively. Oh, and I'll need to brush-up on my ability to colour things in before I set to work producing my Oldhammer Chaos warband.

So I dug out one of my favourite unpainted models, a pre-slotta Citadel Joseph Bugman. I've also got a very similar slotta version of this character, and a much later, much bigger, and very different version of the vengeful brewer. So, skills still up to the task? 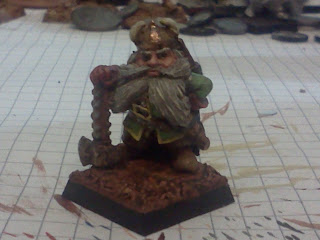 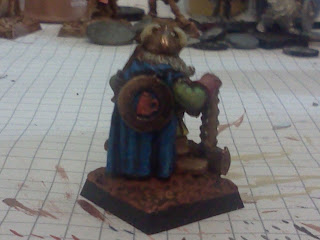 He needs a bit of static grass before he can stagger drunkenly into battle, but that's one down for 2013.

[I'll try to answer some of the misconceptions about my last post soon - if anyone is bothered - but I will say that when I write "A rant, in which I play the pseud, before growing tired and irritable" would tell people in a pretty direct way that the style of the post was taking the piss out of myself and of my prejudices. Of course the content has pissed people off too - with people mistaking what I have called the 'pathetic aesthetic' with simply being a synonym for low level play, simple grittiness or low fantasy, or even with being a plain old 'dick GM'.]