The Second Empire of Humanity was dominated by Law. Angels lived deep inside the ziggurats, directing the affairs of humanity, motivating the Empire to civilise the heathens and bring order to the wild and weird beyond borderlands. Within civilised lands, Law demanded that the lands and people of the Empire were categorised and recorded. A key institution in this project was the Imperial School of Cartography, which instituted the model, maintained to this day, of idealised depictions of the nations of the Empire. 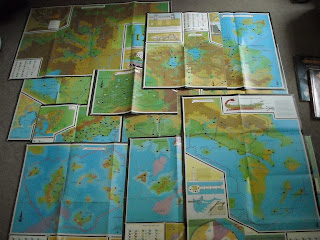 It is a shame that the Gazetteer series (and, actually, a lot of the BECMI D&D range) were not built to last - hardcovers were for the 'serious' AD&D gamers, it seems. Loose soft covers, unwieldy, if beautiful, hex maps - every time I dig something out of my box of GAZ goodness, the small tears grow a little bit bigger...

Hex maps are wonderful gaming tools. They allow GMs and players to abstract movement and exploration to a level perfectly suited for sandbox play. More, they present the perfect foundations for a variety of sub games - domain management, trade, and war, for instance. It seems a pity, therefore, that when a player sees maps such as these, he or she sees them as objects that disassociate them from his or her characters in the game world. Thinking about this while on a lung busting run in the gym - incline up, heart rate at dangerous levels - I figured; 'why not make the hex map an object that exists in the world, so that when players consult a hex map (or fill one in, when mapping the wilderness ala The Isle of Dread) they can imagine that their characters are seeing the world abstracted in a similar fashion.'

[Of course, the production of hex maps that evoke these classic designs is within the reach of everyone, thanks to Hexographer.]