The Epic of the Ur-Men (Awkward Treasure #3)

My PCs are always coming across hieroglyphs, runes or frescos when they explore ruins. As a GM, I use these to reveal a bit of that epic backstory that I have written (or am making up on the spot), to help the Players (and PCs) to make sense of the ruins and its place in the game world, and to foreshadow the dangers (and rewards) that might be found.

But these are also ancient (and valuable) works of art. When real-life looters stripped ancient sites (and, later, museums) of their treasures, it wasn’t just the gold they plundered. On occasion, it was aspects of the very structures that were taken as loot; statues, columns, masonry of artistry and significance. There is no reason why the PCs in a fantasy RPG should not take the same approach. 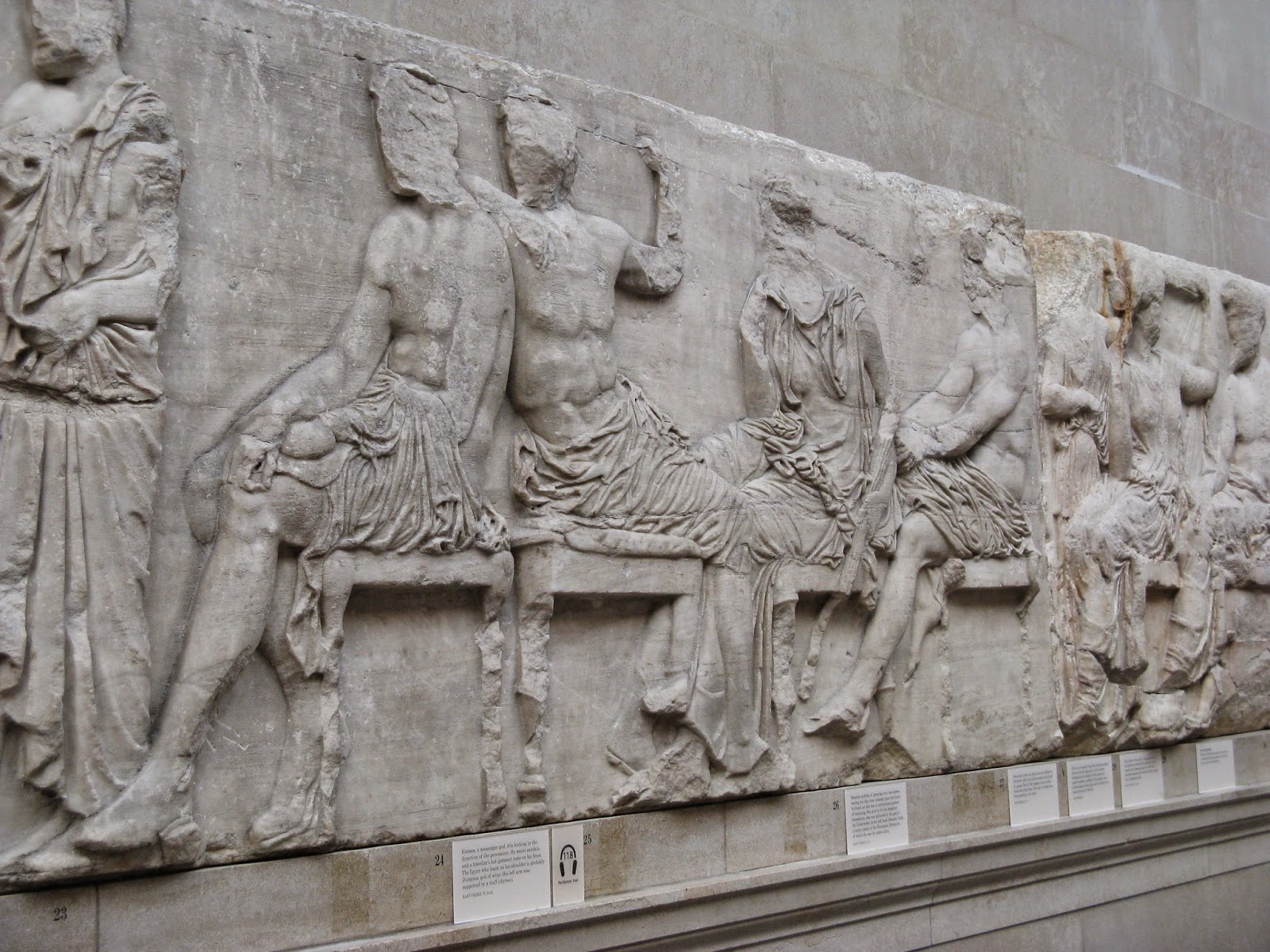 These marbles are powerful and valuable objects, even though Hermes and Dionysos (the seated figures with their backs to each other) are not real. In a fantasy RPG these depictions of Gods, myth and legend can not only be true, they can be imbued with the magic of these Gods, myths and legends.

Carved into a wall, the PCs come across the Epic of the Ur-Men, a history of the First Age of Man ‘written’ in a confusing mix of carven images, metaphorical pictographs, and letter-like runes. It is stunningly beautiful – its aesthetic value alone would bring an expedition profit – and scholars would sell their souls for the opportunity to study and interpret the images, but it is also of great political significance. The lord or city who possess this artefact can assert a link back to the dawn of human existence, to the mythical heroes who challenged and threw down the very Gods.

The only problem is getting the Epic back to civilization. Intact. Removing the required section of the wall will require the skill of at least 2 master masons and a 3d4 journeymen. Loading and transporting the wall will require 4d4 labourers and teamsters and 4 carts. Removing the Epic at the site will take 4d6 hours of labour, with 8 hours work per day being the most that can be relied upon without there being consequences. The GM should allow a good plan, or a larger workforce, to modify this roll, but simply driving the men harder will come at a cost of loyalty and fatigue, both of which may prove costly on the return journey.

This is an expedition, and an expedition is visible. The PCs will need to operate in secret, to draw on trusted contacts, or to mislead (or outright press-gang) their workmen, or else they will find themselves in a race against time. The Epic is worth killing for, and rivals will mount their own expeditions once word of the PCs plans reaches their ears. The PCs will have a head start, but can they keep this as they journey into the wilderness, and can they remove the Epic before any rivals arrive at the site? Regardless of the PCs discretion and speed, the work camp will need to be defended from wandering monsters – if a marauding Owlbear eats their master masons, the PCs might end up bringing only ancient rubble back to civilisation.

This ‘treasure’ could be used at a range of levels of play – it could found at a bona fide ‘adventure site’ such as deep within a dungeon (which presents additional problems) or a ruined city, but it could be a lucky find in the wilderness, a mere remnant of some long forgotten structure, with distance from civilisation the main obstacle. Low-level PCs could be recruited to join such an expedition, leading scouting parties, patrols and so on. The PCs might have discovered the Epic in a previous adventure, its location might have been provided to them in the form of rumours, advice from a sage, etc., or it might be presented to them as a straightforward ‘mission’. Or low-level PCs might lead such an expedition, though they would probably need to win the backing of an ‘investor’. Mid-level PCs might seek out the Epic in order to cement the allegiance of a Lordly patron, while high-level PCs might keep the Epic for themselves, to adorn their stronghold and legitimate their own political ambitions. Of course, the content of the Epic could also be useful in other ways. For example, it would make sense if possession of the Epic counted as a contribution to a magical library or laboratory, and it stands to reason that careful study of its narrative might reveal the locations of potential further adventures – perhaps even the last refuge of the Gods!