Okay, I'll return with a fairly light posting. It's been a busy time painting hills for my dwarfs shoot their cannons from, and then the dwarfs and cannons to put on those hills. And I paint slowly. Very slowly. So very slowly.
First, here is Head Injury Theatre's guide to the stupid monsters of D&D. D&D has lots of 'stupid' in it, but then D&D does consist of hundreds of books spread over 30 years. Some of these monsters are actually 'bad', in the way that lots of very early D&D was 'bad'. I don't want to have my players explore by routinely tapping the ground in front of them with a 12" pole because deadly traps are that commonplace. There's no heroism, adventure, or cleverness in that. It might remind us of the old days, and despite my fondness of old school RPG rule systems and game settings, the idea of dungeoneering being a series of escalating death-puzzles is about as exciting to me as D&D being World of Warcraft, now with added paper! I want my players to role-play their characters, be heroes (or villians, or snivelling sneaks) and have fun doing so. Which is why this is a bad monster. 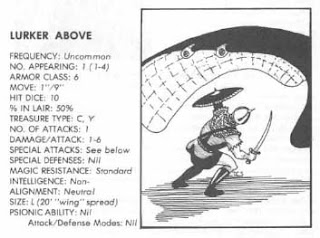 It's not that it's stupid, it's that it's bad. Just how are a party of adventurers meant to cope with that. How will the players not feel that they've been 'cheated' when the ceiling drops down on them and kills them. Put The Lurker Above, and its kin, in your game, and you've got henchmen taking point once the players re-roll their characters. Heroes all.

Anyhow, I've been living my online gaming life around the Dragonsfoot (for all my classic D&D needs) and Bugman's Brewery (for my WFB Dwarfs) fora recently, and do recommend that if you interested in these game systems you check out those sites.