Perhaps in order to demonstrate my gamer ADD, I'll keep posting my archetypes for Hammerstein! The purpose of these is to not only add flavour to the character creation process, but also to speed up character creation by assigning all skill points and equipment at the roll of a dice. When we recently played classic D&D - which we'll be playing even as Hammerstein! is rumbling away in the background - reminded me just how important it is that the players are able to roll up characters and have an adventure (and roll up replacement characters) in a single, short session. I'll probably post on player character mortality later this week, but as far as the last session of D&D goes, if 6 starting PCs can kill 11 goblins in a stand up fight without any fatalities, then combat isn't risky enough to be perilous. Never mind grim. And adventure without real risk may as well be a ride on a ghost train. 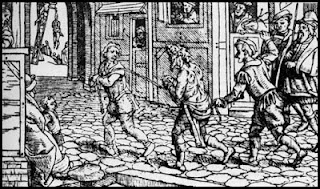 A self-written legend in his own lifetime, Canis Olahu is the most feared bounty hunter in the world of Hammerstein! Hailing from the Pearl Islands of the Boiling Sea, his leering, sun-browned face is the stuff of outlaws’ nightmares. He wears several necklaces of teeth, reputedly one from each bounty collected. His wealth means that he has no need for the petty rewards of bounty hunting, but his extraordinary vanity keeps him at the heels of wanted men, so long as fame might be the reward.

[These archetypes obviously need a bit more tweaking.  For one, their starting money - XZ is not some strange numerical system found in the world of Hammerstein! In addition, as I work through the 'Thinkers', I'm thinking of cutting the levels of magic - even folk magic/cantrips - for the archetypes for whom magic is not a central aspect. So rather than every character starting with 6 points of magnitude in folk magic, as now, the base level would be 2 or 3 points of magnitude, with extra points of magnitude eating into the points that are spent on skills and so on. There also needs to be a bit of fiddling with the resistances - as I'm thinking of capping Resilience and Persistence at CONx5 and POWx5, the number of points that can be automatically allocated to these 'skills' could take some starting characters right up to, and beyond these caps.]