After weeks of not playing anything other than boardgames (face-to-face at least - I've been playing in an online Age of Treason game [which uses Legend rules], GMed by the writer of the book, no less), tonight was meant to be the beginning of a short(?) trip down memory lane. Variously, illness, children, holidays, and being a local anti-folk 'star', have all hampered getting on with any substantial roleplay gaming over the past couple of months. In an effort to reboot the enthusiasm that had drained away, I suggested we get back-to-basics and play a bit of D&D. And I mean actual, honest-to-goodness D&D. Something quick, easy, and unpretentious. Faced with a very short space of time in which to come up with an adventure, I allowed the dice to roll and to rule. I pulled Advanced Fighting Fantasy 2e off the shelf and used its dungeon generation system (described here, by Coop) to create a hook and a cave system, and then went to the Mentzer Basic Set to generate monster numbers and treasure hoards. I choose the monsters, added some unique (and fun?) features, uncovered the 'why' of the dungeon. I ended up with this mess of notes: 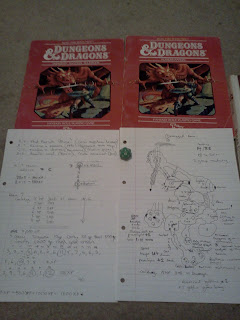 Enough to run a game off, especially when fresh in my head. And then I check my phone... game cancelled. Bugger. Well, in that case, YOU (my players, that is) might well be getting this dungeon 'horrored' up with reference to Crypts and Things. YOU have been warned!