Disease and Disaster in Hammerstein!


There is plenty of death in Hammerstein! But there are no mundane diseases or natural disasters. That’s not because I am after a game world completely lacking the knee-deep in syphilitic shit vibe of WFRP (our next game will involve revisiting the WFRP1e rules to run a slightly higher-fantasy sandbox game [i.e. Hammerstein!]). It’s because there is just no need for mundane disease and disaster – in fact, there is no place for them – in a world in which diseases can be caused by plague demons, curses and warpstone, and in which natural disasters can result from the whims of supernatural entities, from local nature spirits to weather gods, and the intervention of sorcerers. Who needs chaotic weather patterns when you have Chaos?

In a world of gods, demons, and magic, the evils of the world are deliberate. Darwin’s reaction to the reproductive cycle of the ichneumon wasp was to question his theism; what manner of benevolent deity would produce a world that included a creature whose existence depended on such a vile process. But in Hammerstein!, of course, the world did not arise out of the operation of the amoral laws of nature, and it was not created by a single, benevolent deity. Rather, it was the creation of a pantheon of self-interested supernatural beings (and these gods made men, they are not man-made gods), and has been shaped by the actions of all manner of supernatural forces, from the unknowable extra-dimensional whims of the many-angled demons and angels, to the more human, and humanely cruel, passions of wizards and warlocks. In this world, something like the ichneumon wasp would not cause anyone to question their belief in the supernatural; it would be quite correctly understood as the creation of a cruel god, vile demon, or even the invention of a powerful, wicked mortal.

So, in Hammerstein! there are plagues and floods, crop blights, droughts, and earthquakes – but these are always fantastical in origin. The physics of the world is just… different. The gaming side effect of this is that PCs can always intervene heroically. Or at least, die trying. When the city is riddled with plague, the PCs can root out the Cult of the Weeping Pustule. If the Abby of St Albrax has been reduced to rubble by an earthquake, the PCs can investigate the reason why the Earth Elementals are angry. That’s a more adventuresome world than one in which end up playing Dr John Snow in Middenheim, or quiz professors of seismology at the universities of Genezia before recommending changes to the planning regulations. That might be a game, but it isn’t one of fantasy adventure. 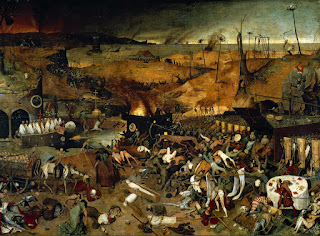 In Hammerstein!, this picture isn’t an artistic representation of the horrors of plague. It’s nigh-on documentary!

Does YOUR fantasy world have mundane disease, ordinary famines, and the like? Does it also have monsters, curses, warlocks, and the stalking undead? How on Titan do your mock-medieval settlements survive the threat of the fantastical AND the mundane? Do your mock-medieval populations survive the increased death rate with significantly higher fertility rates than would be the case in a ‘realistic’ setting? Does ‘good’ magic reduce the death rate from the mundane to the degree that the fantastical is required just to prevent a population explosion? Is the fantastical so marginal that is simply does not intrude on the lives of the ordinary people, being the stuff of the frontier, so that the terrors of heroes and villains is just legend to the smallfolk?