To bring us up to date with the current campaign (following from clearing Kalten's Keep and the Exploration of the Mire Wood [One, Two]); The party rested for a few weeks, and considered their options. What was going on in Gateways?

+ Elwyn the Renegade Cleric is still somewhere in the foothills of the mountains west of Gateways.

+ The Elf who was smoking away his sorrows in the Island of Lost Dreams is dead, and so, therefore, are any leads. Who knows what the Rahib has managed to do in the intervening weeks down in Arbelorn? Consolidate his power, probably…

+ The ruins of the castle on the lake are groaning again. Literally. The castle was once home to Gaskell the Black, ‘King’ of the Mountains. Gaskell was one of the last open worshippers of Um’hurabbu, the Angel of Law that was the power behind the Second Empire of Humanity. The mass executions Gaskell performed centuries ago have left a stain of damnation on the island, and the dead regularly wander the ruins. Periodically the ruler of Gateways, currently a nephew of the Duke, Sir Marcius, hires adventurers to put a stop the infernal – literally – racket. There’s a 1000SP reward for any party who can ‘silence those who have forgotten that they are dead’.

+ There is a murderer on the loose in Gateways. In the past week, a whore and a known pickpocket have both been found gutted, their eyes poked out. The local sage, who might just be a bearded drunk with an authoritive line in story telling, sees the hallmarks of the Chaotic Entity Vis’aya, the Dissolver of Boundaries, in these murders.

+ The Beastmasters of Byzantia have sent an agent to Gateways, looking to buy Hippogriff eggs, or even better, a Hippogriff fledgling. They are willing to pay 1000SP per egg, or 3000SP for a fledgling. There are rumours of Hippogriffs nests high in the mountains that lie west and north of Gateways. 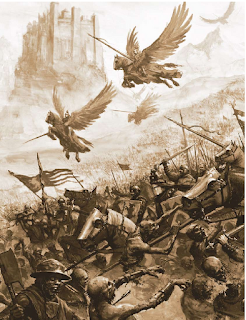 What do you want Hippogriff eggs for? Ah. Aieee!

After some debate, the party decided to have a chat with the Beastmaster, to learn a little bit more about Hippogriff, their habits and habitat, and their mission. With 1000SP on the table, they took up the offer, and equipped themselves with mules, ladders, rope, tents, torches, spears, a wardog etc. (they had read the Old School Primer by Matthew Finch in the meantime), as well as a couple of hirelings. I had rolled up a hexmap of the mountains using the system in Advanced Fighting Fantasy 2e (the wilderness is a dungeon), and the tables from Basic/Expert D&D and Labyrinth Lord. Some interesting encounters, and with the difficulty of travelling in mountains, the party were in for quite a few days in the hostile wild.

Near where the Foamfall River tumbles out of the mountains there is a small village. Once, it was a boom town, back when the mine was being worked. Now, most buildings stand empty, with a few families of goatherds that eke a living from the hard lands, and a transient population of prospectors hoping to strike it rich, long after most had given up hope. A pretty unlovely place, but they did have a fine line in goat sausages. Tully, the hermaphrodite Halfling, bought a string.

The party discovered that there were, indeed, Hippogriff in the mountains. The goatherds lost goats to these flying predators with frightening regularity. The villagers also believed that there was a Griffon in the mountain, a massive beast worshipped as a god by the primitive mountain people. This was something to avoid.

With no obvious path, the party stuck close to the cliff face, camping in the open. Heading higher into the mountains, they ran out of cliff face to follow. The party decided to head towards the Foamflow, the best part of a day’s travel north. As they came into a narrow valley, the party spotted a group of seven fur clad humans. Or were they humanoids? And were spotted in turn. The party was cautious, and the CAVEMEN yelled out a warning (or was it a greeting? or a threat?) before moving surefootedly over the broken rocky ground and out of sight.

The party reached the Foamfall, which here in the mountains was a fast flowing river in a deep, sharp sided gully. The party followed the river upstream, until they came to a small building. The party investigated cautiously, and found that the building was roofless and abandoned. A short distance away from the building was an iron gate set across a tunnel that headed down, under the Foamflow.

The party split. One group, led by Tully, readied the building to be used as a camp that evening, while the more martial members of the party headed underground. The iron gate opened to a staircase, at the bottom of which was a dull orange glow. In a passageway deep underground the party found five figures sat in a circle on the floor, their hands stretched out towards a ring with a glowing orange gem. The figures, three large, two small, didn’t respond to the party’s calls. Chip used his spear to send the ring a few yards down the tunnel. The desiccated ZOMBIES groaned; some turned to desperately follow the ring, the others attacked, but the party made short work of these slow, brittle monsters. With the Zombies reduced to dust, Chip took the ring. The gem a pulsating, glowing orange, he ignored the warnings of his comrades and put the ring on. A sense of warmth coursed pleasantly through his body.

Declining to investigate the tunnels under the Foamflow any deeper, the party returned to the surface and enjoyed a Halfling cooked meal. The party surmised that the building was a shelter for goatherds and other mountain travellers, but with it in such a poor state of repair, a family had sought shelter from the elements underground. How long they had been down there before they had died, and how long they had been undead, it was impossible to say. As was the relationship between the glowing orange ring and their undeath...