Well, I haven't made much progress on those Oldhammer 40K Marines. And boy, are they are bastard to put together; the way the arms fit into the shoulders means... no, sorry, the arms don't fit into the shoulders even in the single pose that is 'possible'. It does make you realise how well engineered most of the current plastic kits are, whatever their other faults. After putting together my 'test' marine I decided I needed to use a blob of greenstuff inside each shoulder pad. And using some conservative Saudi-style converting - cutting the hands off a few Marines (and sticking them back on again, of course) - I managed to create a modest variety of poses. Which leaves me with eight Marines as so: 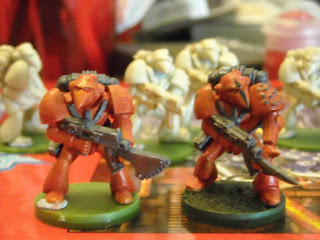 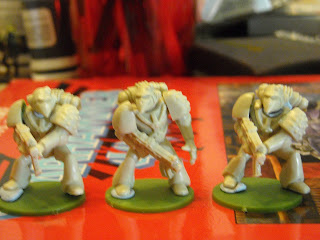 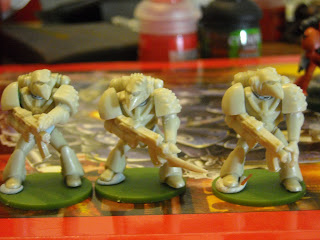 Upright with the aid of blu-tack - I've taken to painting their legs separate from the rest of the body.

I decided to go for an orange colour scheme because... I forget. I didn't want to paint the squad as part of any of the 'major' chapters, so I skimmed through the more obscure marine colour schemes in Rogue Trader and the Compendium. I thought about using one of the crazy 'alien terrain camouflage' schemes... And then painted them orange, go figure. Actually, the 'test' marine was a bit of a disaster. The glue didn't hold, I put a black ink wash (why?) on before the 'magnolia' undercoat had dried, leaving the model a mess of dirt grey. A catalogue of school boy errors would be a generous description. I gave the model a quick clean and undercoated using 'Macharius Solar Orange', a Citadel 'foundation' paint, and then used 'Blood Red', 'Blazing Orange' and 'Golden Yellow', with the metallic equipment painted with 'Greatcoat Grey' (a Privateer Press paint), 'Codex Grey' and 'Pig Iron' (another Privateer Press paint). Nothing fancy, and the results aren't too fancy, either! 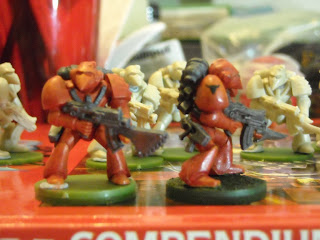 I've achieved a much cleaner look on the second Marine. He didn't have a dirty, aborted base-coat, of course. They both still need a few more details - I'm thinking of adding some wings either side of the bull's head - not quite Blood Angles, but the Flying Buffalo Chapter?

But now for my Space Marine Captain. I was going to pick up a classic metal model, but instead I have these: 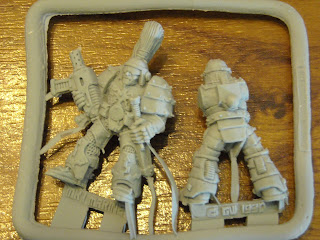 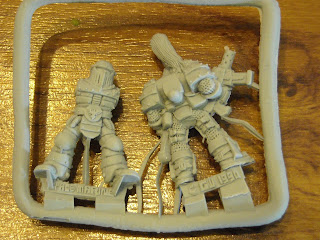 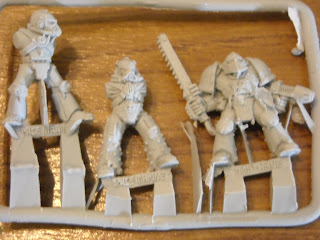 Finecast! Well, this will be my first experience painting Finecast. And of cleaning the 'flash' from Finecast! What I did find amusing that my first Finecast miniatures have the dates 1990 and 1991 stamped on the slotta tabs. In other words these sculpts are from the same era as my Oldhammer 40K Space Marines, even if they are made from new-fangled whatchamaresin. At £20.50 for five miniatures, they're not quite the bargain the e-Bay Marines were, but at just over £4 per miniature these are pretty competitively priced. Especially when compared to the cost of a single Finecast 'character' miniature (£10+ apiece). In fact, nearly all my Games Workshop purchases in the past couple of years have been from their 'Collectors' and 'Specialist Games' ranges. As much as we might moan about GW, hidden away on their website are some classic miniatures and, while 'forgotten' games such as BloodBowl, Necromunda, and Mordheim might not get much support in the way of new stuff, the range of miniatures still available for these 'abandoned' lines is impressive. Snap them up before the moulds break!

Anyway, 'Captain, My Captain!' Which of these should be the Space Marine Captain for my Oldhammer 40K tactical squad? Here's my thinking. The Marine in MKI armour (the one with the open face and plume) should probably be a Rogue Trader in antique armour. According the article by Rick Priestley in the Warhammer 40K Compilation (p19-25) - to which these miniatures are the partner pieces - the legs of the MKI suit are unpowered! What does that leave Marines wearing this with, Move 1? The Marine in the MKII armour - the one on the same sprue as the MKI - I'm thinking of using as a Chaplain, with the faceplate painted up as a stylised skull. The MKIII - the one with the Chainsword and Plasma Pistol - now that, I think is my Captain. The MKIV and the MKV - the other two on that sprue, from right to left - will probably end up as Captains of other, future Oldhammer 40K squads, though I might need to find some new arms and weapons as these guys are all armed with Bolters.

Now all I need is an Oldhammer 40K Marine with a Rocket Launcher.