Carousing is a feature of many Old School games. Some give out xp for carousing, and for some, excessive, extravagant, public spending is the old way to turn 1gp into 1xp. I like these ideas, especially as I’m of the mind that one of the best ways to understand ‘the adventurer’ is to think of them as ‘rock stars’. A world in which professional adventurers are a relatively common sight, in which the successful ones end up rich beyond anyone’s wildest dreams, many die young, and those that live long enough end up as establishment figures with large, country estates… yes, that’s a rock star/D&D adventurer.

With this is mind, levels are understood as more than increases in skill, but broader abstractions that also include increases in fame/notoriety. This idea is already built into the classic games by the fact that higher level characters automatically attract followers, can build strongholds, etc. It’s not just the fact that a character is a good swordsman that allows him to attract a body of loyal, armed men at name level. It is that everyone in the Duchy knows that the character is the best sword in the Duchy.

So far, all I’ve done to mechanise this is to give xp bonuses for high Charisma, and for successful boasting. Extravagant spending might warrant an xp bonus, too… but it’ll have to be on something truly useless, with bonuses for inventiveness. I am thinking of codifying it – probably pinching wholesale from Chris Kutulik’s Hill Cantons Compendium – but for the moment we will play loose with these ideas.

However, extravagant spending on ladies (and men) of the night, or on less mercenary seduction, is not just a means to bolster the ‘rock star’ image of the adventurer. In Mikedemia Press' City Book (which I  really like, so I ought to write about it sometime - and it appears that it is still available here), an optional rule suggests that adventurers are so filled with lust (well, it doesn't exactly say that) if they do not find companionship they risk wasting away entirely. 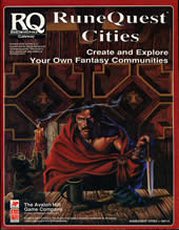 I think 'Cities' is great - I have the version (loosely) for RQ3, but it's packed full of tables usable for any game.

“Characters must have companionship at least once every five weeks, or see their abilities to concentrate, study, and cast magic steadily deteriorate. Relevant characteristics and skills might drop by a few percentiles or a point or a level a week until companionship is obtained.”