Khare, Cityport of Traps… A horrible place to visit, a worse place to live. But better than the Baklands, which is why there is a bloody big magic wall in the way.

This week’s session of our AFF2e game was, for me, the most satisfying by far. Unlike in the gamebook, where YOU proceed from the Shamutanti Gate to the North Gate engaging in Bizarre Search Behaviour (BSB) before slumping to your knees having failed to gather all four lines of spell required to escape this hell hole into the Baklands, in a ‘proper’ RPG the PCs can be free to move about the city as they wish.

Well, more or less. The party’s first encounter in Khare involved them being bundled into a cell in the gatehouse. Of course, they were free to resist – you’ve always got a choice, however unappealing. But the guards didn’t seem intent on robbing them, except through ‘taxation’, and so the PCs got to spend time in the company of an old man who had voluntarily spent the past thirty years in a gatehouse cell rather than face the dangers of Khare or the Chaos-blasted wilderness outside the walls. He was more than happy to tell them what he knew of the city. While you might not expect him to be up-to-date on the current affairs of Khare, the fact that he meets a significant proportion of travellers into and out of the city and has a long term ‘friendship’ with the captain of the Shamutanti Gate, added to the lack of distraction, means that he is a well of gossip. And exposition.

So the party learned that the North Gate was magically locked and that it could only be opened by a spell known by the Hidden Lords of Khare, and the location of several key sites in the city – including the observatory of ABRAXUS, the Sightmaster Astrologer and agent of the Kings of Analand. And the party went straight there, ignoring the Temple of Slangg (God of Malice) and making short work of a hideous LIVING CORPSE (enjoying the generous thanks – largely in the form of pies – of some poverty stricken GNOMES) and VANGORN THE MURDERER on the way.

In the fight against Vangorn, the players asked me if they could try to take him alive. I couldn’t find anything in the rulebook, so I ruled that the PC could roll a Test of Luck when delivering the ‘killing blow’. Success equals helpless, defeated foe. Failure and, well, YOU were engaged in a life or death struggle, you know. Given that it was Cramer the Rogue (LUCK 12) who was ‘lured’ into the trap, the Test of Luck was a foregone conclusion, and Vangorn ended up hog-tied on the floor. And when it turned out he knew nothing of import, ruthlessly dispatched.

It turned out that Abraxus lived just the other side of the bridge over the stinking, roiling mass of Chaos that is the Jibaji River (an answer to ‘why do we have to go through Khare to cross the river’) in a tower much like that of Yaztromo, which allowed me the opportunity to dig out one of my favourite Fighting Fantasy illustrations. It also gives me an excuse to reproduce it below. 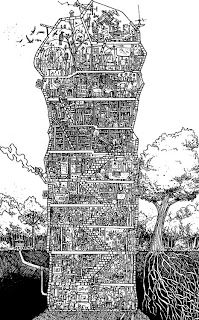 Abraxus was able to give the party plenty of information, but could only speculate as to the identities of the four Hidden Lords of Khare. Turns out they wear voluminous robes and mirrored masks which hide their identity from mundane observation, and are well protected by magical wards that protect them from arcane scrying. But Abraxus strongly suspects that a fellow member of the Khare Natural Philosophy Society, LORTAG THE SAGE, is one of the Hidden Lords. Quite how he has managed to stay alive when this is so widely suspected was unknown, but he must possess some mighty magics – alongside his BRISTLE BEASTS.

I don’t think that the party quite understands the BSB which is traditional to Fighting Fantasy, as they proceeded directly to Lortag the Sage’s home, choosing to ignore the Firemaster and no-handed artist of exceptional talent, while diverting the ORCLINGS with some worthless Goblin tin coins. After some hesitation stemming from Lortag’s insistence that the PCs leave their weapons in the hallway, the party were invited into Lortag’s second library – his everyday study. Lortag is indeed a Hidden Lord, and appreciates that the ARCHMAGE OF MAMPANG is as much a threat to Khare as he is to the rest of the Old World. Even their ensorcelled walls, imbued with perhaps inhuman magics (an answer to, ‘why can’t we just climb the walls’) will be no protection to an army of Mampang led by the wearer of the Crown of Kings. He offers to tell them his line of the spell, in exchange for their help solving a puzzle. ‘Adventurers are good at that sort of thing’, he says. ‘Adventurers are much cleverer than they look. Well, living ones are, at least’.

I showed the PCs the puzzle pages, and waited as they tried to work out what the symbols meant. I was all set to have Lortag shout, ‘Eureka!’ and give the PCs the credit for their ‘inspiring presence’ (an unimaginative response to the problem of failure in what is, despite the openness of this episode, still a linear quest with choke points aplenty) when they actually did solve the puzzle. Lortag was most grateful, and offered his speculations as to who the other Hidden Lords might be. They are likely to be people of authority within the city, and, as he was made a Hidden Lord by his predecessor as Sage of Khare, other lords might represent the continuity of long-established interests in Khare. Based on some of Abraxus’ suspicions – who it is clear is a rival of Lortag in the learned circles of the city – the PCs discussed with Lortag the possibility that the Hidden Lords might not be human, a suggestion that the sage entertained, adding his own speculation that a Hidden Lord need not even be ordinarily corporeal, given the regalia involved.

And we left it there, with the PCs about to cross the city to visit the Temple of Slangg.