So, thanks to everyone for helping me make up my mind. De Bellis Antiquitatis it is. The book arrived yesterday, just in time to begin a month of DBA - throughout this month my gaming attention and energy will be devoted almost entirely to my doable DBA project. 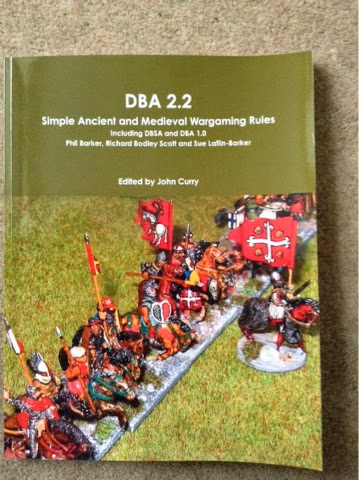 The project is to 'build' *a* game; two armies, board and scenery, in order to be able to run a number of 'historical' scenarios on the spot, without the other player needing to bring anything. As I'm on a bit of a Bernard Cornwell trip at the moment, the choice was simple; Sub-Roman British (II/81) vs Early Anglo-Saxon (II/73) - i.e. The Winter King, etc. - or Middle Anglo-Saxon (III/24) vs Norse Viking (III/40) - i.e. the Uhtred books. God knows why I didn't go for the Sub-Roman Arthur option, but the latter won, and I ordered the appropriate DBA armies from Essex Miniatures. C, meanwhile, has ordered Crusaders vs Saracens...

So, 29 days to paint and base 24 elements, knock together a 2ftx2ft 'Arable' game board and accumulate the appropriate bits and bobs of scenery. I'm unlikely to succeed, but by the end of the month the finishing line should be in sight.