Bank Holiday Monday, I gave my wife some quiet time and headed up to my Mum's with a stack of boardgames (and the girls, who were happy with Matilda on DVD). 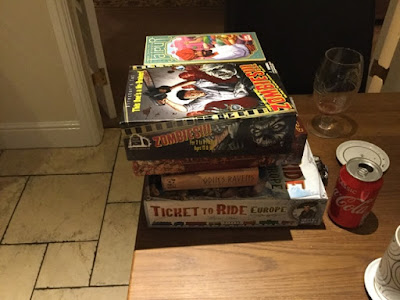 Why did I choose Zombies!!!?

From this stack we choose - as my Mum and sister have been binging on series one, two, and three of The Walking Dead - to play Zombies!!! To no great satisfaction. Unlike so many contemporary games, Zombies!!! has the potential to drag on, and on, and on. Perhaps this is an accurate simulation of a zombie apocalypse, as the initial excitement fades into the routine of survival. Or not. In order that no player is eliminated from the game (unlike, say Monopoly, which not only drags, but also leaves so many players spectators as the end game runs on forever), in Zombies!!! a player whose 'shotgun guy' dies simply respawns at the starting point. Which, again, simulates good zombie apocalypse strategies - increasingly distant 'patrols', returning to base when short of resources or needing a rest. Not tremendously fun, though.

Now, I have played in pretty fun games of Zombies!!!, but this isn't the first time that the game has played out in this fashion. So much of Zombies!!! depends on the way in which the map tiles are drawn, and laid out. In this game, quite by accident, we ended up with an almost entirely linear map, meaning that any feeling of exploration was lost, replaced by something that felt more like zombie snakes and ladders. This is made worse as all the buildings containing special items we down one long 'zombie highway', meaning that the weapons and other items that tip the balance in favour of the 'shotgun guys' were very difficult to get, and keep.

Oh, and we also rolled terribly, more than once players lost their 'shotgun guy' from a pretty good, well resourced position after rolling a series of 1s and 2s.

Given that the game ended with all of us barely interested, and quite relieved when my brother announced he was off to the pub to watch West Ham v Man U, well, on this play alone I could only give Zombies!!! one braaaaain out of five.